I had to put the warning in the title to alert the soy boys!
(Which I’m sure that there are none on here!)

Two women were struck by a car whose driver sped through a protest-related closure on a highway in Seattle, authorities said early Saturday.

The driver, a 27-year-old man from Seattle, was in custody, Mead said, adding that impairment was not considered a factor. Charges remain under investigation, as does the motive and point of entry onto the interstate, but Mead said the unidentified man faced multiple felony charges and was suspected to have come on the wrong way on a ramp. 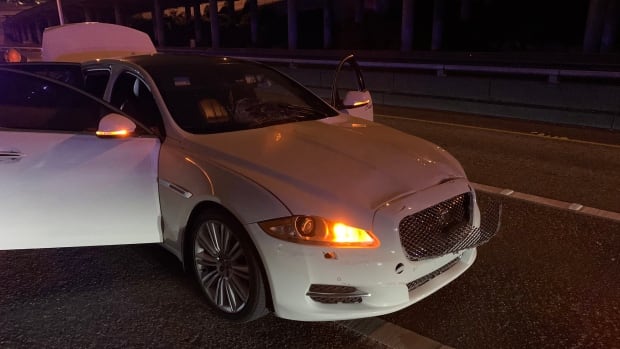 Two women were struck by a car whose driver sped through a protest-related closure on a highway in Seattle, authorities said early Saturday.

Were they “protesters”? What were they doing in the street? I saw the news yesterday where there were at least 4-5 hundred “protesters” who were trying to stop a huge trailer truck. They were jumping on it and trying to break the driver’s window. He finally just started driving, very slowly, away with a number of idiots who were standing on the hood and cab. I don’t know what ultimately happened, but if those imbeciles got hurt or worse, they deserved it.

I’d like to know about the driver of that jaguar. The fact that they’re not saying anything about him/her makes me suspicious.

The news has reported that this guy was running away from the cops. The implication was that he ran into these people on purpose, which have made it more fodder for the liberals to claim “victim status.” If he was running away because he was trying to evade the police, they become "collateral damage” which is of little use from the liberal perspective.

Yesterday, the police arrested about 40 protesters who were blocking a main highway in Tampa. They resisted arrest which forced the police to get into a scuffle with them. Of course in that case, “social distancing” is out the window. So cops have to risk their health for a bunch Bozos who need to go home and cut out the crap. I hope this strategy bites the Democrat Party in butt.

In Baltimore protesters ripped down a Columbus statue yesterday and threw it into the Inner Harbor. Baltimore has spent a lot of time and money developing that area, and it was once a great tourist destination. Now the merchants are leaving; the stores are going empty; and its headed downhill.

It’s a darn shame. With all their problems, this was one thing the city leaders in Baltimore were getting that right along with a really first rate convention center, Camden Yards and the football stadium. Now the rioters, the criminals and protesters are making decent people feel unsafe in that area.

one has definitely died now.

one has definitely died now.

Caroline, This was on that page:

They were doing the Cupid Shuffle. One man said he kept hearing the chant, "Black joy is liberation. Black joy is revolutionary.”

A few min later, the celebration turned to guttural screams when the driver struck 2 people, sending their bodies several feet into the air.

I only bring it up because … I don’t see anywhere that the driver was a black male!

I only bring it up because … I don’t see anywhere that the driver was a black male!

nor do I…but I wonder if he was lefttist or a blm supporter, democrat, well-known politician/celebrity? . OR a woman. or any combination of the former. AND…the jaguar…that’s not a cheap car. Where did he get the jaguar. annnnnd Black…that’s why there was no information…you know…wasn’t it somewhere in California…maybe all California decided not to put out mug shots anymore cause its…….RA…ciiiiiiist.

Leftists accuse Black man who mowed down two white protestors a white supremacist. You gotta tie yourselves in the worst kinds of knots to be able to claim this and then report it without laughing yourself silly.

Leftists accuse black driver who killed white Seattle protester of being a...

No discussion of this here at RO?

Haven’t gotten around to it. This was so sad…this little girl…all the mother was doing was to try to park or get around a blm barrier…BLM didn’t like that and someone in BlM indiscriminately shot at the car killing the child. They’ve been doing things like this…it isn’t the first time…they’ve shot other motorists, and cops.

THEN, the mayor Bottoms BLAMES IT ON TRUMP!! This woman is quite attractive…but her heart is evil…and she’s a liar and opportunist…but so is the Angel of light…Lucifer.

If Frederick Douglass can be a colonist and KKK leader this black man can be a white supremacist.

It’s now whatever the left wants it to be.

And who are these lovely specimens of demon children?

I thought I saw something about it somewhere here.

I’m thinking much of the left could be called demon children.