Any of you guys play video games?

I love dayz gone. - when you think you’ve beaten the game and then it turns out you’ve only explored half the world? priceless. You’re not going to like hearing this, but my favorite game of all time is… drum roll left 4 dead 2.

Elden Ring, I’m for sure interested in the premise, but souls-like games are usually too much for me. The challenge without checkpoints is more frustrating than fun in my opinion

Nice on Yakuza 0 btw, play the rest of the series if you haven’t yet!

Um. I don’t know what to say. I think it’s fun as hell. I guess I’m stupid. To anyone who hasn’t played it, I highly recommend.

By telling someone else their opinion is inferior to yours, you are being a dick.

Seriously man. I’m not taking it personally. But come on. Must be a liberal thing.

But it’s orgins is as a table top, figurine game. “BattleTech” has been around since the 1980s. 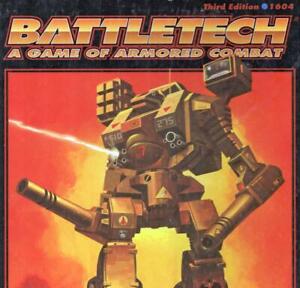 Actually, it didn’t start with figurines; it used folded cardboard counters with little plastic clip thingies to stand them up, with images of the different battlemechs printed on them. I still have mine.

I got started in Battletech in 1990; many a fun late night of junk food and battles in my late twenties. Mechwarrior was originally a role-playing addition to BT; we always incorporated it into our battles, including what the character did in communication with his lance, and if he had to eject.

The only computer game in the series that I did to any extent was Mechwarrior III: Pirate’s Moon. I first did it on an early Windows 98/Pentium II IBM computer that showed some cursor lag, which made aiming weapons a pain. When I got a newer (2004) HP with XP and Pentium IV, it fixed that problem, but there were glitches. I think I uninstalled and reinstalled it without effect.

The biggest thing was that when I used the jump jets, instead of going up and down the way it’s supposed to, it sometimes went up and even without powering the jump jets, I just sort of glided downward. When I was doing the game in LAN with my cousin and another friend and the jump jets did that, my cousin said that on his computer, my mech was standing there one moment, then warp-drived into the vertical…

I guess you are going to explain to me why an Urbanmech is such a bad mech now.

Got no idea what its capabilities are/were in the video-game versions, but they sure sucked in the board game. They should have given it engine and jump jets enough for the next speed increment (it was slow as molasses as it was) by sacrificing the small laser, eleventh heat sink, and half a ton of armor.

Um. I don’t know what to say. I think it’s fun as hell

I’m not disagreeing, and nor is Russianbadger there.

Um. I don’t know what to say. I think it’s fun as hell

I’m not disagreeing, and nor is Russianbadger there. His humor is over the top and taking the piss out of everything.

They took that concept and mastered it with Dead by Daylight. Only forced multiplayer I enjoyed. I’m the antisocial gamer. My mic is always off, always, no I won’t turn it on. Splatoon was great there was no talking.

I don’t understand anything of what you just posted. And I don’t know if you’ve ever played deathwing, but it’s fun. That video seems to exude some sort of mental illness? Not sure what they’re trying to do there.

I skimmed through a dead by daylight footage video. All I saw was some guy walking around. Do you fight anything in it?

I don’t understand anything of what you just posted. And I don’t know if you’ve ever played deathwing, but it’s fun. That video seems to exude some sort of mental illness?

Doesn’t everything with Warhammer?

“This list of Khornate massacres is incomplete. You can help by expanding it.”

BLOOD FOR THE BLOOD GOD!

Yes brother. FOR THE EMPEROR

I skimmed through a dead by daylight footage video. All I saw was some guy walking around. Do you fight anything in it?

You and four other players are sacrifices you have to outrun the Villian (many of them) by starting generators and not getting caught. Then make it to the gates. You can’t fight back only hide, and save other players from the sacrificial poles.

Warhammer sucks. And no offense United, but your game sucks too. This is my favorite game, but it would be a lot better if they took the violence out of it.

Games should not have any sort of violence unless they’re actively promoting the LBGTQFAIRA+ lifestyle, like The Last of Us part 2, which is my 2nd favorite video game of all time.

Dude I never thought I’d say this but I miss the real you please stop.

like The Last of Us part 2, which is my 2nd favorite video game of all time

I think it was intended as virtue signaling, but as a man I just appreciated it for what it was.
People like me and you should encourage more of that and pass it off as virtue signaling.
Lets be honest had that been 2 men that game would of bombed lets be real tho.

Dude I never thought I’d say this but I miss the real you please stop.

Women must really dig that cause that would of been my nope point even after playing the first.