Boris Johnson to Address Parliament on the Ukraine

“It comes as President Putin recognised two breakaway regions of eastern Ukraine as independent states in a major escalation of tensions, with Boris Johnson expected to give a statement to parliament on the UK’s next steps later today.” 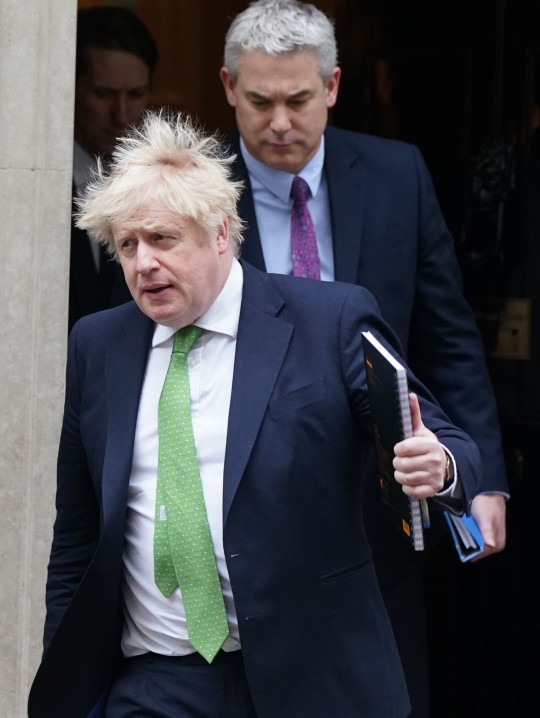 “Where were going, we don’t need combs.”

While Bide sits on his tail, taking “half tailed” responses to Soviet … sorry Russian aggression, even the Germans are doing more. They have shut down the Northstream Pipeline.

Biden is acting like the Russians have bought him out, which they probably have. Sonny Boy Hunter did get $1,000,000 from the Mayor of Moscow. If only we had known that Biden could be purchased for so little money, we could have taken up a collection to buy his support.

In the mean time, Putin has found the perfect approach. The Ukraine Army can’t shoot back until the Russians kill them. Otherwise, it’s “Ukrainian aggression.” Putin has sold the concept.

What’s next on Putin’s list? Look for him to go after Poland then most of the rest of Eastern Europe. Putin hates NATO because it has the concept of “If one country is attacked, all of them are under attack.” That’s why he was so concerned about Ukraine joining NATO.

Putin is the modern Hitler along with Xi in China. Biden’s weakness is bringing on World War III. When it comes to foreign policy, Biden is the modern Neville Chamberlain.

For the domestic economy, he is the modern Herbert Hoover. Soon the homeless will be calling their encampments, “Bidenvilles.”

democrats say Trump was colluding with russia. Well. I don’t believe that, but at this point I’d rather have a president colluding with them and saving the world from this

Whatever sins Trump made, colluding with Russia was not one of them. I just got done listening to a 5 minute, 2018 Trump rant against Germany for buying natural gas from Russia. “Why should the U.S. fund most of NATO for Germany’s protect against Russia when Germany is paying billions and billions to Russia for natural gas?”

Good question, and one that a president, who was colluding with Russia would not have posed. It only shows how crooked politicians, like Adam Schiff, were able to fool the American people and how dishonest the Democrats in Congress are. And shame on Mitt Romney for voted to remove Trump from office the first time.

“Where were going, we don’t need combs.”

we all know the man likes a party.

Personally, I think Martin Kimani’s speech to the UN Security Council nailed it.

I’m not sure Putin has banked on international sentiment going this much against him.

Join in with Putin, Smoke down with Kim Jong Un, and try to put a casino in Nu-krania while leaving one of his kids in direct control of one of the important under pinning’s of the negotiation. Like some high level nepotism. Also this would be the green light for Betsy Devos and Ben Carson to drain the coffers and fake a bunch of belligerence for China because ya know China it’s Chinas fault its hunter bidens laptop full of Burisma in joe bidens china.

In the mean time, Putin has found the perfect approach.

I’ve considered that it’s just barely possible that he might not go through with a full invasion. Instead, what he’s done with a whole lot of posturing, hit squads to go after the people in the Ukrainian government who don’t toe his line, and he gets a puppet government installed instead.

Pure speculation on my part; no bets that the invasion won’t happen.

Not sure, although I think it’s interesting that Putin is doing this now and not on Trump’s watch.

Putin is doing this now and not on Trump’s watch.

Conservatives are afraid. I’ve showed them their true face. Martin Kimani, like a boss, speaking truth to power. Subtle messages within. Reaction could be made about China’s Belt and Road Plan into Africa.

South Pacific. Greatest donor is Australia - a disease spreading whore. Greatest contributor to foreign aid for all Pacific Island nations and yet China has consolidated debt from many of them. Tonga, Kiribati, Palau all gone. Fiji next. All because of hubris. Because of arrogance. Not wanting to be part of a team and sulking if one is not team captain. Alliances are being made. You can be in the tent peeing out, or out of the tent peeing in. This is happening everywhere.

I must go to them. I must go to the indestructibly post world war 2 agreements and tell them that unless they become a little more self aware, time will run out. Whatever happens next I will not compromise. I’m not a fan of conservatives. I hope history will judge me in the context that I deserve.

See Foghorn, I can do satire too, and I don’t even need the bible. Just a garbage comic book no one has ever heard of.

Pure speculation on my part; no bets that the invasion won’t happen.

My theory is that Russia will invade up to the Dnieper River and create separatists states where they can. Perhaps to create a neutral buffer between Russia and west. Where that get’s sticky is in the northern part of the country especially around Kiev. But that’s an uneducated guess.

Not sure, although I think it’s interesting that Putin is doing this now and not on Trump’s watch.

Because…You think Trump would have done something about it? Trump talked a lot about Putin and Russia, but when the rubber hit the road he caved more often than not.

Now you have people like Mike Pompeo praising Putin. I think that’s probably what Trump would have done.

I think that’s probably what Trump would have done.

Because…You think Trump would have done something about it? Trump talked a lot about Putin and Russia, but when the rubber hit the road he caved more often than not.

Now you have people like Mike Pompeo praising Putin. I think that’s probably what Trump would have done.

He didn’t do much, but he didn’t hang a kick-me sign out in front of Putin like Biden did. So what is this that Pompeo actually said?

He didn’t do much, but he didn’t hang a kick-me sign out in front of Putin like Biden did

Pretty certain the sign Trump carried was a more…submissive nature with regards to Putin. Mark Esper said Trump wanted to pull out of NATO after all.

So what is this that Pompeo actually said?

That Putin is very shrewd, very capable. Personally, I think it is a reach with regards to Pompeo. I’ve got nothing nice to say about the man, but this is not a hill I’m prepared to die on.

It comes from an interview on MSNBC on Feb18:

Honestly, I think Pompeo is a gutless coward for not calling out Putin, but to say he is fan girl-ing Putin like Trump is doing is a big stretch. He’s not a Russian agent, he is merely someone not worth listening to.

Trump said recently, and I quote:

“I went in yesterday and there was a television screen, and I said, ‘This is genius.’ Putin declares a big portion of Ukraine — Putin declares it as independent. Oh, that’s wonderful,” Trump told a conservative podcaster in an interview published Tuesday.

Speak the Truth they can’t hide! Either your with Putin or with the UNITED STATES OF AMERICA! FORD MUSTANG! MAN ON THE MOON, WW2 CHAMPIONS!

Or enjoy the borscht, nuclear meltdowns, and polka music and cry and whine about CRT when intelligence shows they aren’t stopping at Ukraine… Moldova next then Latvia/Lithuinia/Estonia.

Clearly, Putin just needs to put a cigar in his mouth, run his nation into an even deeper hole, and everything is water under the bridge. Things like invading Africa repeatedly. Supporting corrupt regimes. Or actually threatening us.

Not sure what this has to do with what Trump and Pompeo have done, but ok. That said, I was probably 10 years old at the time, so I’d be happy to opine on Carter and his actions with respect to Cuba and Castro if you like, but understand at 10 I really didn’t care, so I can only Monday Morning quarterback what Carter did and I have no qualms about calling Carter out.

That said I think we are largely in agreement on what Putin is doing.