Do you believe Newsmax when it says there's no evidence of Dominion fraud?

Here’s the link to their statement on the Newsmax website:

Facts About Dominion, Smartmatic You Should Know

Since election day, various guests, attorneys and elected officials have appeared on Newsmax TV and offered opinions and claims about Smartmatic and Dominion Systems, both companies that offer voting software in the U.S.

My favorite part: “No evidence has been offered that Dominion or Smartmatic used software or reprogrammed software that manipulated votes in the 2020 election.”

MY favorite part is where Newsmax states repeatedly that “Smartmatic and Dominion both state…yada yada yada,” which proves NOTHING except that Dominion and Smartmatic are denying manipulating their software to affect the election results…which one would EXPECT them to do.

But there’s no reasonable evidence other than you wanting it to be true.

No evidence that YOU’VE admitted to seeing, anyway.

Or Newsmax, supposedly a trusted source for the right

They have defied subpoenas to testify before state legislatures.

Election boards have defied subpoenas to examine the actual machines.

consciousness of guilt = evidence of guilt

Newsmax doesn’t have the money to defend themselves against a lawsuit, Dominion gave the same threat to Sydney Powell and she told them “file your case” ; which they have not done because they are guilty of everything she has alleged of them IN WRITING.

Sorry to see more judicial terrorism but that is how the Marxists fight, it won’t save Dominion or effectively censor any of the truth.

I guess for some people, reality just isn’t enough. Now I understand how some Americans believe George W Bush was behind 9/11. Don’t forget; Obama is a Kenyan Muslim and Hillary Clinton runs a pedophile ring outside of a pizza joint.

60 lawsuits have NOT been “thrown out with prejudice.” If you’re going to argue your case on its merits, you can’t get away with lying about it. Neither has President Trump’s “personal lawyer” said that was “no fraud.”

If Obama or Clinton tried a tenth of the crap Trump supporters have done in this election, this forum would have sharpened its pitchforks on day 1

That’s because Clinton and Obama were the beneficiaries of voter fraud (although probably not to the same degree as Biden), not the victims.

60 lawsuits have NOT been “thrown out with prejudice.”

You’re absolutely right. They have merely been dismissed with prejudice. My mistake.

Neither has President Trump’s “personal lawyer” said that was “no fraud.”

Ask and ye shall receive: 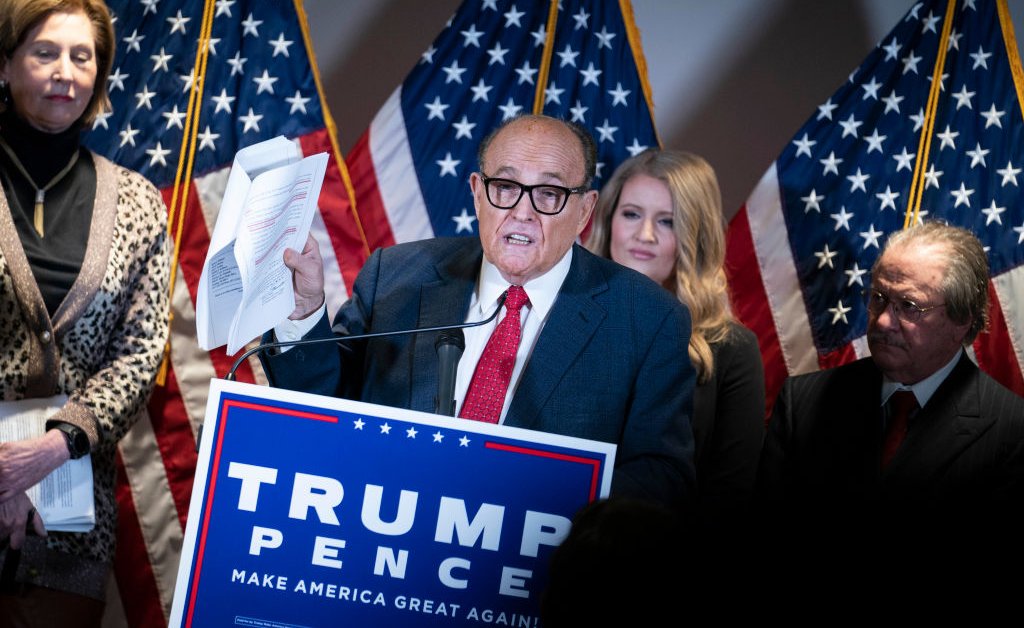 While the President and his lawyers make histrionic claims in public, the campaign's legal filings are narrow in scope

That’s because Clinton and Obama were the beneficiaries of voter fraud (although probably not to the same degree as Biden), not the victims.

I’ve gotta say, if that happened, there would have been evidence. I seriously doubt you could name a single person who has gone to jail for committing voter fraud on behalf of Obama/Clinton/Biden.

I’ve gotta say, if that happened, there would have been evidence. I seriously doubt you could name a single person who has gone to jail for committing voter fraud on behalf of Obama/Clinton/Biden.

There is such a thing as escaping justice, at least in this life. Happens a lot. Existence of evidence doesn’t mean anyone necessarily does anything with it. There was plenty of evidence of the sexual abuse that my father committed against me and my sister. The number of occasions of abuse numbered like half a hundred or more, the number of abusive acts half again to double that number, and the number of actual legal charges that could have been leveled against him was multiple hundreds. But no one looked into it, and those who did know something about it never said a word to law enforcement or the district attorneys. He never faced charge one pertaining to me and my sister.

You’re absolutely right. They have merely been dismissed with prejudice. My mistake.

Whatever happened to “the seriousness of the charge demands further investigation”???

Given the way the court system has been politicized, one needs to look at the judge’s background before you accept their rulings as unbiased. This is where politics and legislating from bench has taken us.

Look at the judge in the Flynn case as an extreme example. Despite the fact that the Justice Department asked him to drop the case, he continued on in the extreme becoming the new prosecutor. He even appointed another lawyer to continue the prosecution. No one could say that he was an unbiased jurist. He went so far as to ruin his reputation in a never ending witch hunt. To me, his conduct was grounds for impeachment.

Agreed. The guy should be removed from the bench…permanently.

Sadly, and in my opinion, the time to have filed suits was immediately at the point when several states decided to circumvent the legislative requirement necessary to change voting rules and not wait until AFTER the election. Posting legal challenges to the process based on several swing-state constitutional requirements before the mass mailings/lack of adequate signature verification
might have been successful. But the election was fixed by media incessant hammering of Trump and the censoring of news regarding the Biden’s. Under the circumstances And with a United Left’s thumb on the scale for 4 years we should have expected what took place. Once 170 million “votes” had been counted it was a little late. Was there voter fraud? Of course - enough to reverse the results? Maybe. But to expect the courts to step in and reverse the results of a completed election is ridiculous. IMHO

Not possible, Doc. In order to have a successful lawsuit, one has to have something called “standing” and in order to have “standing” in a lawsuit of this nature, one must be able to show that one has been DAMAGED by the conditions one is challenging. There cannot be “damage” shown until after the fraud has damaged the election to the point where the plaintiff’s own votes were nullified by the fraudulent votes or that the outcome of the election can be shown to have been materially affected by the unconstitutional changes made to the election which encouraged, or at least facilitated, fraudulent voting.

Then are you saying the act itself of changing voting rules - change contrary to a state’s constitutional provision that only the state’s legislature is so empowered - is impossible to stop by court intervention? Suspending the state’s constitution is not subject to “standing”. I would offer that “COVID” was the excuse used by the Left to pressure the Right to stand down preemptive legal challenges and that, after the election, our courts wanted no part in taking cases challenging abridgment of legislatively, constitutionally approved voting processes. Why would the courts fail to hear these many cases? Well, did we not see for the months leading up to the election the grave and widespread violence and insurrection in the streets of America. “Lack Of Standing” has often been used as a catch-all used by courts to side-step the hearing of certain cases.

That’s true, of course, but the courts SHOULD have NO FEAR of insurrection for doing what is plainly their actual JOB.