A team of archaeologists and mapmakers say they have uncovered a forgotten tunnel that 80 Jews dug largely by hand as they tried to escape from a Nazi extermination site in Lithuania about 70 years ago.
The Lithuanian site, Ponar, holds mass burial pits and graves where up to 100,000 people were killed and their bodies dumped or burned during the Holocaust.
Using radar and radio waves to scan beneath the ground, the researchers found the tunnel, a 100-foot passageway between five and nine feet below the surface, the team announced on Wednesday.
A previous attempt made by a different team in 2004 to find the underground structure had only located its mouth, which was subsequently left unmarked. The new finding traces the tunnel from entrance to exit and provides evidence to support survivor accounts of the harrowing effort to escape the holding pit. 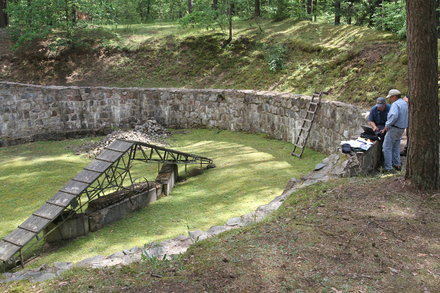 In 1944, 80 captive Jews who were being forced to burn bodies at a Nazi extermination site attempted an escape.

For those who deny the holocaust happened or claim it was not as severe as it was.