The Left are circulating this photograph of a sign supposedly held by a conservative at a protest in Nashville, to show how cruel and hard-hearted we are.

If a conservative actually is holding this sign, he/she is remarkably stupid – what a gift to the left wing! But my guess is that this sign is a False Flag, made by a Leftist. Does anyone have any further information on this? 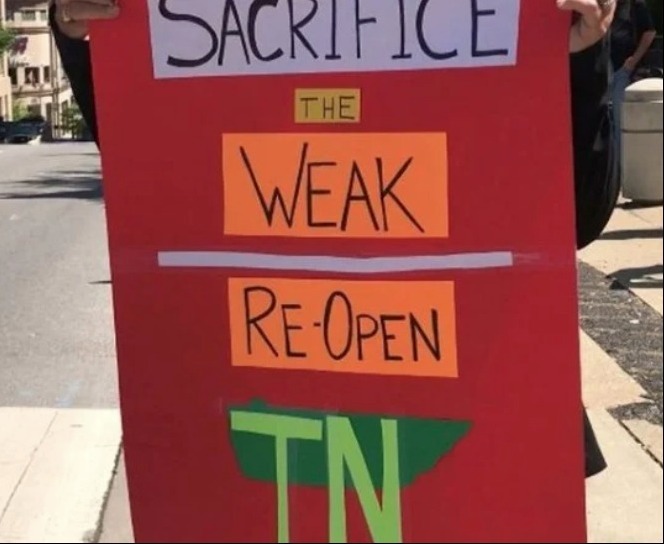 I could see one of the socialists holding it to get publicity against the conservatives. It’s called dirty tricks.

On another website there is a flaming Trump hater who is publishing a scoreboard where he points out the number of people who are sick and the number who have died and crows triumphantly that’s all Trump’s fault. I called him on it, and he blew back with usual response that I am a stupid Trump supporter. I responded that it was hard not ending up looking like an ogre when you link people’s deaths to politics. One of the liberals actually posted that he agreed with me.

In another photo, you see that the sign-holder is masked and wearing sunglasses, while the other protestors in the background are not wearing masks. I think that’s strong circumstantial evidence that this ‘protestor’ is a plant.

Also: someone took this photo, and then posted it on Leftwing sites. So the ‘protestor’ probably had an accomplice. If the photographer was from a genuine news service, surely they would have interviewed this person, with such an inflammatory sign?

All the circumstantial evidence points to this being a Lefty False Flag operation. But we should try to get the views of people who were there. Do you know any one in Nashville or surrounding areas who might have gone to this protest? Someone who could testify – or not – about the frequency of mask-wearing would be useful.

Let this be a lesson for future demonstrations: watch out for False Flags: not just signs designed to discredit us, but people carrying swastika flags (or similar ‘Nordic’ permutations of the swastika), or wearing Klan regalia – if not Leftist provocateurs, these are people who ought to be forcefully driven away in any case. Confederate Flag Bearers are probably sincere, but, in the current circumstances, harmful, since this symbol overlaps with white supremacy even if it doesn’t logically imply more than nostalgia for one’s turf and misguided but courageous ancestors.

Liberals depend on lies and propaganda for power

This is of course absolutely true.
But politics is a battle between Left and Right, for the hearts and minds of the Middle. So we must not let their lies and propaganda go unanswered.

The old (supposedly) Chinese saying, that “A picture is worth a thousand words” is probably an understatement. This photograph will be circulated widely. It would be nice to have a hard, documented case against it, to expose the liars.

That would mean, ideally, an honest reporter who interviewed the holder of this extraordinary sign, and asked about her conservative credentials – who else there knew her? Why is she masked? Where is she from? Getting even lies on tape would have been invaluable.

Future demonstrations must have a ‘truth squad’ which patrols them, looking for Leftist False Flags – because I promise you that there will be many more.

Unfortunately, colleges are churning out goose-stepping leftists by the millions and have been for decades now. They are pre-disposed to vote liberal. What do we do about them.