I will be voting for Trump in the general election because the Democrats are politicizing the Justice System in the United States which is toxic to our freedoms and the rule of law.

the rule of law.

Trump’s indifference to “the rule of law” explains the unprecedented actions we’ve seen, but few here even consider that.

When you take an interest in what Hillary Clinton and Hunter Biden have been up to, you will have some credibility. Until then, your posts are the refection of partisan hack-ism.

I don’t want Trump again, but given the crap that your side has done to him, with the Russia hoax, I can have no sympathy for your position. That goes double for the fact that you party is an advocate for a politically motivated police state.

oh hell yes i’m voting for him again. All the family…all friends.

And ironic as you probably chanted with Trump and Flynn during Trump’s first election campaign; “LOCK HER UP, LOCK HER UP!!!”…

Now Trump is about to be indicted for crimes, and who knows, might get locked up. Oh the sweet irony. Trumpublican tears taste delicious.

well actually sugar britches. no one here gives a damn what you like to imagine.

Sugar britches…lol. That. Is. Hilarious.

people who live in glass houses… 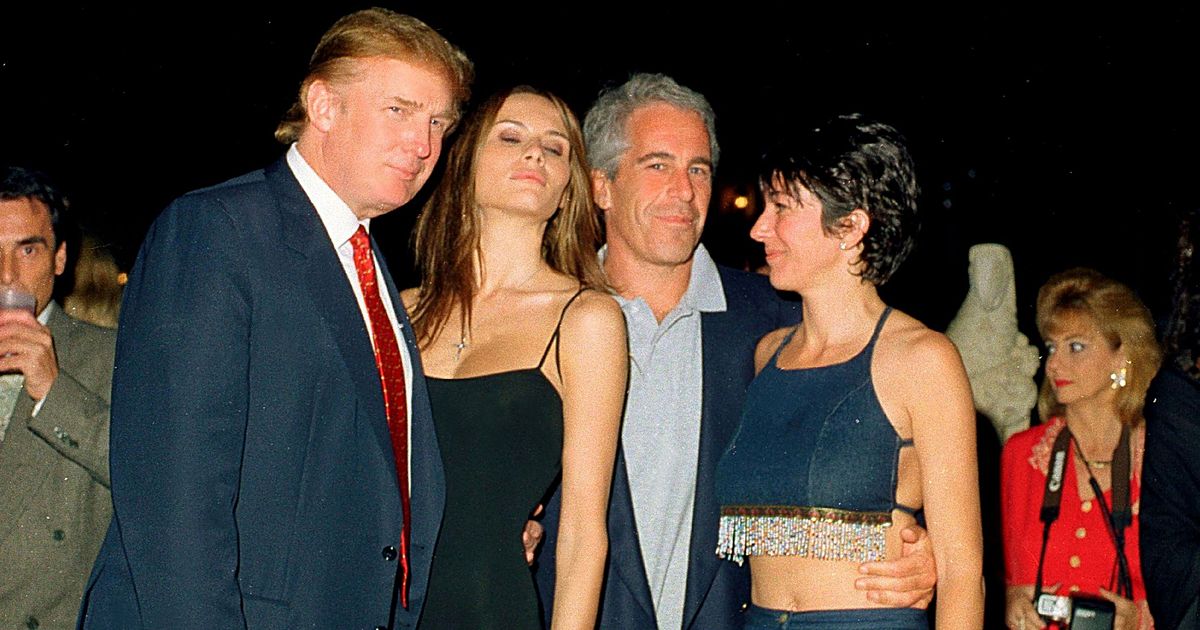 Jeffrey Epstein’s Rolodex: A Guide to His Famous Friends and Acquaintances

It’s interesting how they try to paint the article in the overwhelming light that the absolute only friend of Epstein you should know or be concerned about is Trump. Ignore the democrat friends.

I think Trump is a disgusting human being, who should be in prison if he is a pedo. Same with all of these people. But being associated with people in a democratic functional society isn’t enough for a conviction. In reality, it isn’t good for much of anything except confirming ones opinions.

The optics on the conduct of the Justice Department and the FBI toward Republicans is terrible. It’s always raids with guns drawn, leg irons and early morning and late night raids. The targets of these extreme measures have been non-violent defendants. Yet, the news media covers up for this behavior.

Anytime the feds come from white collar, to drug dealer to actual monster they do this. They don’t come any other way.

One excuse Democrats are claiming for this is that they are looking for an excuse to use to prevent Trump from running in 2024. I find that ironic since Trump might be one of the weaker Republican candidates. Although Trump’s supporters are hugely committed, he has many middle of the road people who oppose him.

I wanted him to remain free for two reasons 1 the gadfly-effect it would create a martyr. 2. He was the easiest to heat.

We are going to be a total police state

We are a police state and have been since the war on drugs and the patriot act. The police are taking more and more of a role in society today than ever. 15 people in town got civil infractions for failure to mow lawn. Yet homes unsold don’t get these tickets because its hard to ticket a bank. We both have common ground in reducing the amount of police and the scope of their influence.

“obstruct, influence, or impede an official proceeding of the United States.”

“Wire fraud” (After collecting money from doners pledging to fight the results of the election, never actually fighting the results and then funneling the money into political action committees ect).

In Georgia we have the possibility of:

Interference with performance of election duties

Of course these are all just allegations, we’ll no more as time goes on. Anyone of these on their own probably wouldn’t amount to much, but taken as a whole with Trumps other behaviors (refusing to protect the capital (and now we’re hearing enjoying watching it happen), grifting on a scale that would make Elizabeth Homes blush, and just being a giant turd of a person.

I’d argue these crimes would have been comiittied along with possible seditious conspiracy. I question the wisdom of doing it now it should of been done as a private citizen the moment he left the whitehouse.

I will be voting for Trump in the general election because the Democrats are politicizing the Justice System in the United States which is toxic to our freedoms and the rule of law.

This hasn’t been a great year for rule of the law on the left, ie Roe V Wade. The meer idea of police and social security aren’t mentioned in the constitution if you want to be a textualist.

I swear the DOJ better have a lot on this undeniable to 80% of Americans. These people run things in the counties to the north and northeast of me that terrifies me.

I have no idea how they found nothing surprised they didn’t plant something.

Honestly they need to look into the women who said stuff about bill no one in politics should be connected to him. Biden isn’t connected to Epstein that should say something.

I think Trump is a disgusting human being, who should be in prison if he is a pedo. Same with all of these people. But being associated with people in a democratic functional society isn’t enough for a conviction. In reality, it isn’t good for much of anything except confirming ones opinions.

I firmly believe both Bill Clinton and Trump have abused Children as well as Bill Richardson, and Matt Gaetz.

And yet, even when Republicans control the Executive and Representative branches of government and grill Clinton for more than 10 hours (10 more than Trump), they get nothing. Nothing. because the media on the right has spent so much time convincing you of wrongdoing while in reality, it was exactly what the right always claims of Trump. A witch hunt.

What media on the right?

As to the Repubs doing jack poop, they did the same with the repeal Obama(don’t)care. They passed the repeal in the House many times as a dog-and-pony show, but when they got power in the Senate and ultimately in the White House, what did they do? Jack diddly poop. So pardon me if I don’t trust many of the Repubs in Congress.

Trump’s indifference to “the rule of law” explains the unprecedented actions we’ve seen, but few here even consider that.

And you had the gall to call the investigation of Hillary a “witch hunt.” Trump may be guilty, but to condemn him for “indifference to the rule of law” and insist that they had nothing on Hillary boggles the mind.

And Trump’s claim to competence is…?

Every time “he who shall not be mentioned” tries to pass himself off as someone who is “objective and bipartisan” he covers up for Hillary and Hunter’s conduct and blows his cover.

Nail Hunter for Crack there are pictures of him openly using it but it would still not take away from Trumps crimes. Personally no one is above the law if we really wanna believe “the law”.

Shoving classified documents in his socks and down his pants.

What is driving me nuts is why they are hitting him with taking classified documents thats a low bar. I would think this would be part of a larger sealed indictment. If all they can offer to the people is that he stole classified documents well thats weak. Julian Assange was given copies of classified materials and published them and he’s suddenly a terrorist but when other big news media corps publish classified leaks they are rewarded. Also that Rep from PA his house being raided on the same night something spells conspiracy here.

All these texts from January 6th are missing from the DOD, Secret Service and Homeland Security. It sounds like the state is fighting against itself. From the GOP to DEMS on the administrative side.

Not to sound like a conspiracy theorist but with all that has happened since the J6 Commission one has to ask to whos benefit. Some Bush asligned Conservatives are playing pattycake with the democrats, and some old carter democrats (FLYNN) are defecting to the federalist society and stallwarts like Mitch seem to be in the dark.

Maybe they are hitting him like Capone, rather than going for the big Fuzzy stuff like J6, Pressuring Zelensky, RICO stuff, Witness intimidation they will do something boring like a classification leak. Yes he has every right to change the classifications but not remove them from the archives.

The real question everyone has to ask is yeah they are fighting each other but do we fight each other for them? What has my republican neighbor done to me jack squat. Why do we fight their fights?

What media on the right?

FOX News, Wall Street Journal, New York Post, Washington Times, Right Side Broadcasting Network, One America News, Newsmax, The Epoch Times, The Daily Wire, The Daily Caller, The Gateway Pundit, Sinclair Media Broadcasting Group, Blaze Media, The Daily Telegraph, The Australian, SKY News. 2GB and 2UE radio, The Daily Mail (UK), The Sun (UK), pretty much every AM radio network in the US and a whole bunch of others I know I’m missing.

You know, that right wing media.

The answer is, I don’t know and neither do you, however if I were to speculate it’s because whatever she’s done (and despite what you might think I don’t think she’s without fault) the FBI lacks the evidence needed to convince a judge that they have the justification now or at any point in the past to raid the Clinton’s home.|

Which leads me to right now.

But here’s what I think…

The far right makes a lot of baseless accusations, let’s say, for instance about voting. We know that Giuliani was making claims in public claiming troves of evidence of election fraud, while in private admitting he had nothing. Anthony Wieners laptop, Hunter Biden’s laptop, Hillary Clintons emails, Dominion voting machines.

All huge nothing burgers.

Now if that’s what this is, a shakedown, then everyone involved should be prosecuted, and my guess is that the republicans will take control of at least one if not both houses of Congress in the fall and will be able to investigate.

But even if that happens, my prediction is that right leaning media makes it sounds like a coup, but in reality no major charges will be filed because the point was never about catching guilty people, rather owning the news cycle, convincing people that something is happening that isn’t.