Final thoughts on the 2020 election

Trump lost this election because he did not handle the public relations aspect of the Corona Virus well. He made a lot of the right moves. He called for a short shutdown at the beginning, sent significant aid to New York and other states where the epidemic was at its worst, initiated a program to produce respirators on a crash basis and really pushed hard to get a vaccine into production in record time.

The mistakes he made were centered on a failure to present a disciplined, pointed and coherent message. He spent too much time giving rambling press conferences. His instincts to get the economy moving and to avoid causing panic with overly dark messaging were good. Unfortunately he over emphasized the last point which made too many voters think that he didn’t take the crisis seriously.

Biden won this race because he was not Trump. Biden was a lousy candidate who didn’t campaign and simply sat in his bunker. He won’t be able to get away with that as president, but he might be incapable of doing anything else. The man is old and feeble and destined to leave office before his term is up. Perhaps that will prevent him from doing much damage, but it won’t stop the bad people who control him from wreaking havoc on this country. To those who think that AOC and the Squad are just a group of Democrat Party gadflies and outliers, think again. They are the heart and soul of activist Democrat Party. They will be in charge.

As for the election process, it is seriously flawed. The states are going to have to tighten up their absentee ballot process if they are going to maintain the integrity of the electoral process. They are also going to have to tighten up the ballot counting process. As of now the system is a mess in many states. Any Democrat who thinks that election was fair and honest is either delusional or insincere.

I think that there are serious questions about the results in Michigan, Georgia and most especially Pennsylvania. The question about “who won” is settled, but the stench lingers. This was not a clean election by a longshot, and state legislatures are going to have to address the issues of absentee balloting and vote counting if we going to hold this country together. Florida learned that lesson in 2000 and cleaned up its act. Other states need to follow suit.

BUT if those states are controlled by Democrats, chances are they won’t fix the problems.

I wish and hope that you are correct, but I don’t see much hope. The Socialist power elite have taken over, and there will be nothing to stop them. All they need to do is drag their feet for another month and Biden will be officially elected by the Electoral College. That’s what they have been doing with the Durham investigation. Wait long, and they’ve got the power and there is no recourse.

I knew this was going to happen. That’s why I refused to watch the election results. It will be a very long time before we will see another man who is so committed to our freedoms and keeping them intact. It will be interesting to see what happens next, but I don’t hold up any hope. I hope we will all participate in removing Biteme from the WH like the dembos did to Trump.

I hope we will all participate in removing Biteme from the WH like the dembos did to Trump.

I actually encourage this. It’s our job as citizens to hold our leaders accountable. Follow Biden close and call him out for everything he does. I know I plan to.

Yea, right, @Gene. Is that why you ignored his son’s dealings with Ukraine, Moscow and China?

I plan to hold him accountable for policy in office.

He was doing that crap while he WAS in office and you sat mute the whole time and actually defended him.

I plan to hold him accountable for policy in office

Sure you do, starting right after you ignore his admitting to a quid pro quo, taking bribes through his drug addict son and lying about his own stated positions depending on his audience

I am sure that’s your plan

His instincts to get the economy moving and to avoid causing panic with overly dark messaging were good. Unfortunately he over emphasized the last point which made too many voters think that he didn’t take the crisis seriously.

I remember when he kind of confessed in an interview (I forget with who) that he had presented a positive picture to encourage the public. I immediately thought of Roosevelt during WWII. He did exactly that, and the people elected him four times. But the media was on FDR’s side. Grief, they even covered up the fact that he was confined to a wheelchair! But the media gnashes their teeth at President Trump and vocally longed for his downfall every day and is now visibly filled with glee.

As for getting the economy moving, yeah. The media seems to be totally brain-dead about the need to have a functioning economy to stay alive.

I think your overall analysis is good, but I’m not ready to throw in the towel yet. President Trump is a champion fighter. If the truth can be outed, he’ll win.

I plan to hold him accountable for policy in office

Sure you do, starting right after you ignore his admitting to a quid pro quo, taking bribes through his drug addict son and lying about his own stated positions depending on his audience

I am sure that’s your plan

Prove it. Oh wait, you can’t because it didn’t happen. Notice how the story was totally dropped after the election? Hell, it was dropped before the election by the few places that stooped low enough to pick it up in the first place.

Back to keeping Biden in check, right now on my radar is his cabinet picks. A short list for each position (based on what he’s said before and some predicting) was released by politico. According to them, Meg Whitman is likely to take secretary of commerce. I plan to push back on that if it’s announced.

Only someone without a single functional brain cell could possibly believe that Biden didn’t enrich himself, his son and his brother…just to name three…while VP by using his influence AS VP.

Nobody who was reporting that story has dropped it

But thank you for admitting that you only follow the news within your echo chamber!

Back to keeping Biden in check, right now on my radar is his cabinet picks

Biden will not be picking any cabinet members

I’m afraid you’re in for a world of disappointment. People from both parties and countries all over are congratulating Biden and Harris. I bet Netanyahu really stings for Trump. It’s time to read the writing on the wall and prep for 2024. Seems like Cruz or Rubio would be likely options.

Nobody who was reporting that story has dropped it

But thank you for admitting that you only follow the news within your echo chamber!

Cover of the New York Post today, the people that originally broke the laptop story and updated it regularly 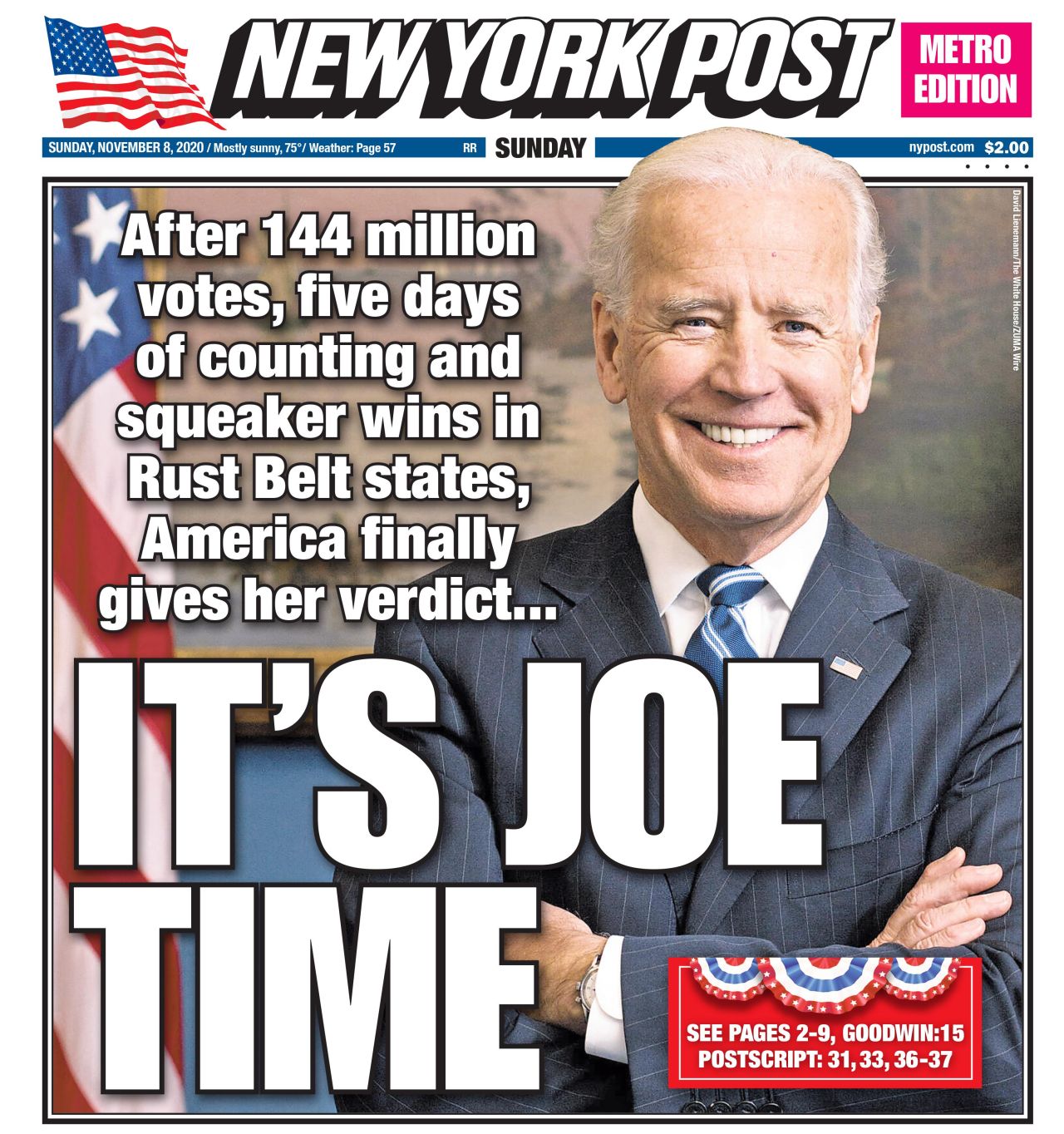 Cover of the New York Post today, the people that originally broke the laptop story and updated it regularly

If today’s headline story is not the Biden laptop, that means they no longer care or are covering that story

You are too easy but if you insist on fastballs down the middle I will gladly hit home runs off of them!

No, I actually went to the liberty of looking at their site. They haven’t published anything new about the story since November 1st. For clarity, I’m not counting casual mentions, just stories/editorials focused on Hunter.

I used the cover to illustrate that even they are on board now.

Back in 1972 I voted for George McGovern and followed what was known about Watergate very closely. Yes, like you, @Gene, I was young, fresh out of college, liberal and naive.

Back then the media was more even handed. People knew that a crime had been committed at the Watergate Complex, but the level Nixon’s involvement was not known.

Nixon obviously didn’t get a way with it after he was elected. The story kept building until he was forced to resign.

It will be interesting to see of this Biden story goes away. The mainstream news media will not report or investigate it, at least publicly. The FBI is supposed to be obligated to continue to look into the computer, but they might drop that story if Biden or other Democrats order them to do that. Heck, they might drop the case on their own because the agency is now an arm of the Democrat Party. I hope that is not the case.

There is no denying that Biden’s son was paid large amounts of money. That’s been known for a few years. There is also the video tape of Biden laughing about how he held up the billion dollars in aid until the prosecutor was fired. The question is did Biden do anything in return for that money and did he get a piece of it? If he did, he’s got problems. If son continues his current “career,” will it tarnish Biden?

Other presidents have embarrassing relatives. Jimmy Carter had his brother, Billy, who took money from Libyan leader Gaddafi. The difference was Jimmy Carter not was involved in a quid pro quo. Biden may well have been.