Mr. President, your opening remarks please: “Thank you my fellow Americans. Two-thirds of Americans polled believe that my opponent standing here next to me will not finish his first term due to his obvious senility. Therefore I wonder about the value of this debate. The Democrats intend to have a fascist Nazi style installation of their leader Kamala Harris and are committing elder abuse on this poor senile elder to do it. Perhaps I should be debating Miss Harris, the descendant of slave owners, and product of Canadian schools.”

Would that not be a great opening?

Trump in Las Vegas this week

Would that not be a great opening?

Although it’s the truth, I would advise you to look at the second debate between Reagan and Mondale in 1984. There was a lot of talk that Reagan was losing it because of his age after his performance in the first debate.

Reagan, forever the great actor, opened up with (paraphrasing). “I will not take advantage of my opponent’s youth and inexperience.”

Everyone burst out laughing, but Mondale later admitted later that he knew he had lost the election right there.

Let Biden screw up on his own. The main thing to look for will be something in his ear or a teleprompter somewhere. Even if he has those things, he doesn’t have the brains to last for over an hour. Just let him come out with a couple of “'Come on Man!” s, deer in the headlights and no clue look or “Ah … ah… ah you know what I mean!” s and that might be enough to finish him.

It would be great if they brought a teleprompter in for him, and he said, “Bring that a little closer, will ya?” He’s already done that in one of his few appearances.

Your comparison pictures are awesome!

One think we need to do is not set the bar too low for him.

Very good point. But there’s also a lesser worry that President Trump will seem like a big meany beating up on a helpless confused old man. Though I guess that would be better than letting him have a pass, but I think President Trump has to walk a tightrope.

I can’t imagine bumbling old Joe surviving a night of debating President Trump in any case, which is exactly why I don’t think his Democrat masters will ever let him debate.

Again, we agree to disagree. I think some sort of shock opening would be great. Maybe not those exact words, but something that is shocking, funny, and undeniably true, all at the same time

I think President Trump has to walk a tightrope

He is much better when he is himself. Thats how he became president.

That is the hope.

People who think like that will think like that no matter what Trump says. Trumps ABC News Townhall last night is proof of that. He was perfect all night and the media the next day just ripped him to shreds. 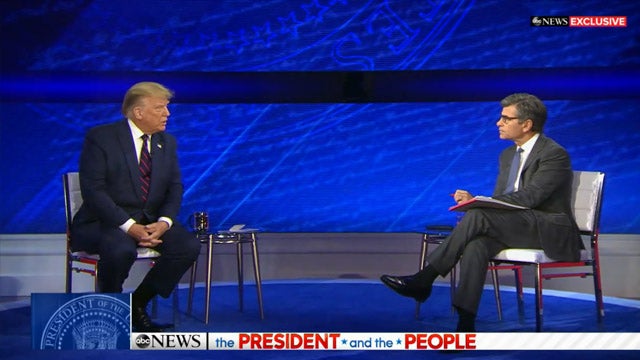 RUSH: I'll tell you what I think is going on. I think it's very simple. I think it was rehearsal for the debate, folks. And don't forget: Donald Trump thinks he can charm anybody.

As a side note: The real first debate is apparently slated for September 29
https://www.debates.org/