The hatred of President Trump by not only liberals, but moderates and “conservatives” as well is appalling!

They don’t just want another president or for him to leave office. They want blood and to completely ruin him and anyone associated with him. These people are bitter fascists and often corporate fascists.

They have not only gone along with compromising election integrity, but they are taking away freedom of speech and dissent as well. They want total control and to even to the point of dictating, manipulating, and controlling your very thoughts.

They want to dictate your speech, thought, and ideas and those who don’t comply must suffer the consequences.

If this is what America has become it can go straight to hell. 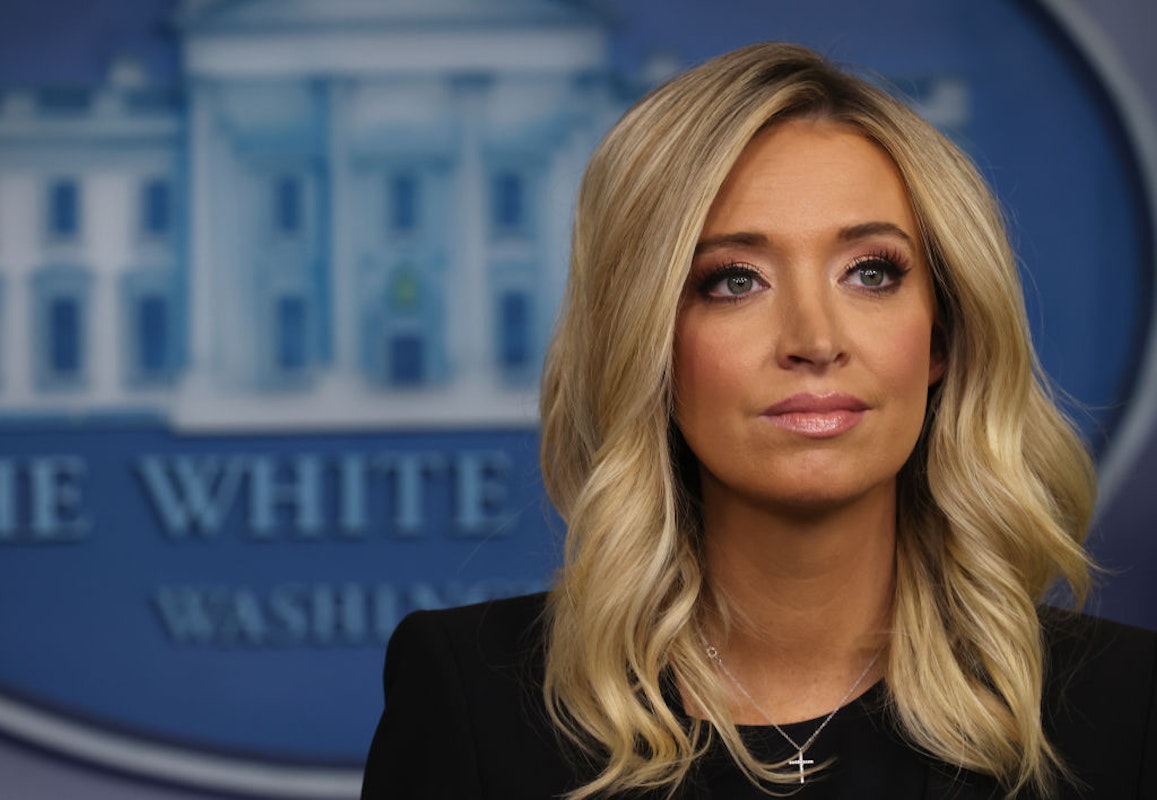 An opinion piece by the Forbes Media chief content officer and an editor of Forbes Magazine threatens any company that might hire any of Trump's White House press secretaries, past or present.

The Democrat party is the party of hate.

Nancy Pelosi is the leader of hate in the Democrat Party. Instead concentrating on support for Biden, the supposed leader of her party, she is wasting time and energy on an impeachment of a president who has a week left in office. To use the cliche, she is cutting off her nose to spite her face.

In the mean time, Congress woman, Liz Cheney, daughter of the former Vice President, has joined the political dingbat parade in calling for Trump’s impeachment. What does she expect to gain? If she thinks she’ll a footnote in “Profiles in Courage,” she’s wrong. Does she think he will pick up on the Mitt Romney political legacy? All she will get is disrespect from rank and file Republicans like me.

she is wasting time and energy on an impeachment of a president who has a week left in office.

they are trying to pass a vote to ensure he can’t run for office again.

The ONLY way to do that is to SUCCESSFULLY impeach President Trump in BOTH houses of Congress, including a “guilty” finding in the Senate and that takes 67 “guilty” votes, which they will NEVER get. It’s a waste of time and OUR money.

The vote to prevent him from serving again is part of the impeachment process.

I know it only take a simple majority in the Senate, 51 to pass, what I admit I don’t know is if that vote can be taken separate from the vote to convict in the Senate. If I had to guess I’d say that can only come after a successful conviction in the Senate.

That being said, I agree that conviction is unlikely, but it will get several Republican votes this time. How many, I don’t know.

I don’t have a real reason for it, but I feel more confident about a Senate conviction than I did about the Georgia Senate seats flipping.

I suppose if there was a reason, there’s been tons of Rs condemning Trump in the recent days and trying to wash their hands of him to presumably help their own political career.

Why should Congress be able to veto another Trump run? Isn’t that an issue that the American people should decide?

Of course, given you politics, @csbrown28, your attitude doesn’t surprise me in the least. Since you think that the American people are collectively stupid, especially Trump supporters, and need the government to control them, barring Trump from running again fits right in with your fascist model.

For the record, I would be reluctant to vote for Trump again. His policies worked better than any president since Ronald Reagan, but his thin skin, unbridled aggressiveness and demeanor probably has ruined what he has accomplished.

For the record, magazine owner, Steve Forbes, was on Fox News this morning. He covered his tracks by saying that this an example of the diversity within his organization in contrast with the big tech companies who are on a repression warpath. He compared the editor’s comments with the black listing of Hollywood actors and producers in the early 1950s and the persecution of citizens of Japanese descent during World War II.

For the record, I would be reluctant to vote for Trump again. His policies worked better than any president since Ronald Reagan, but his thin skin, unbridled aggressiveness and demeanor probably has ruined what he has accomplished.

For MY record, I would happily vote for Trump again. I don’t give a tinker’s dam about his “thin skin, unbridled aggressiveness and demeanor” which are ALL easily explained by how shabbily he was treated for the last 5 years when some of the WORST offenders used to clamor for his approval and support and loved being seen in his company, then turned on him viciously when he was expected to be restrained in fighting back against the slanders and lies.

I don’t disagree that he was treated very unfairly during his time in office. The trouble is, he needed to send attack dogs to do the dirty work, like Nixon did with Agnew. Presidents need to mostly stay above the dirt to look presidential.

Oh, BS, Send! “Looking presidential” doesn’t accomplish spit. Obama managed to usually “look presidential”, except when he was trashing the country while on his apology tour, but he was a LOUSY president by ANY measure. I WANT a president who fights back. Too many GOP Presidents have tried to stay “above the fray” and Democrats kept steadily making inroads against the country and the constitution.

Except that it gets you re-elected and would have kept senile, old Joe Biden from winning.

If Trump had held the Corona Virus press conferences in a more organized way and had gone on TV with a 9 PM address to the nation, explaining what we were facing, the Democrats would have needed to stuff the ballot boxes more and might not have succeeded. We would have probably held the Senate, and would not be looking at the shaft that has opened up for us.now. Trump’s conduct after the election cost us the Senate.

Schumer is right. The Democrats are going change America. Get ready to live in hell with sky high taxes, massive inflation, draconian environmental regulations and a sluggish economy that will soon be second to China. We will overrun by illegal aliens, crime and a demoralized police force to combat them.

You can say all you want about Obama. I don’t think that he was much of a president, but he always acted cool, if not down right cold. That gets you re-elected. Raising hell all the time does not.

It worked for Andrew Jackson in the 1820s and '30s, but he was president at different time. He was game changer in that he was first president who did not come from the upper class or the Revolutionary War generation .After Jackson, Americans wanted their presidents to be cool, calm and collected. Candidates like William Jennings Bryan and Huey Long got people stirred up, bu they didn’t win. Others, who acted like Trump, ran as third party candidates and really went nowhere.

Why should Congress be able to veto another Trump run?

This little thing called the Constitution that creates a path to do it?

Since you think that the American people are collectively stupid

See you’re exercising your strawman talents again. I’ve never seen anyone engage in stawman as much as you.

In the mean time, Congress woman, Liz Cheney, daughter of the former Vice President, has joined the political dingbat parade in calling for Trump’s impeachment. What does she expect to gain? If she thinks she’ll a footnote in “Profiles in Courage,” she’s wrong. Does she think he will pick up on the Mitt Romney political legacy? All she will get is disrespect from rank and file Republicans like me.

And disrespect from me too. Not that it will matter one bit, but this letter went out in the mail today to her:

By the time you read this, you’ll likely already have voted to
impeach the arguably best president America has ever had–the
president that has consistently advocated peace, law and order his
whole term, including in his speech that day. Everybody, of
course, condemns the trespassing, damage and theft.

And shame also on those few Republicans out of the hundreds of
thousands at the rally that joined the Democrat Antifa thugs who
obviously came prepared with supplies. And shame on the police
for obeying Democrat orders to let them in.

Democrats are full of moral outrage against those events, which
they wrongfully call “insurrection”. Hypocrites! Where was their
moral outrage when Marxist BLM and fascist Antifa were destroying
cities last year?

This little thing called the Constitution that creates a path to do it?

There is nothing constitutional about this stupid impeachment. The people should have the chance to elect the President, not the Congress. You spend four years on the Russia hoax doing everything you could to derail a constitutionally elected president. But, like I said, you are an advocate of fascist system. You want the government to control every aspect of people’s lives, except abortion.

See you’re exercising your strawman talents again. I’ve never seen anyone engage in stawman as much as you.

You are one to talk about strawmen. All you ever do is mouth Democrat talking points. You seldom waver. The Democrats start the Russia hoax, you are all in. Even after the Muller Report gave you nothing, you were sill all in, just like the puppet you are. They talk about the “improper phone conversation with a Ukrainian official” reported by a fake whistle blower, you are, of course, all in. We look at a strong in economy and low unemployment for all sectors, including Blacks an Hispanics, and all you can do is post phony Democrat Party charts and graphs that full lies and distortions.

That’s why I’m down you more than any other “progressive” on this board because you are old enough to know better. The others are college programmed robots who might learn something later although those hopes are probably a pipe dream. I thought that I was liberal until I was 31, and then I learned the score. My first Republican presidential vote was for Ronald Reagan, and I have not checked the “donkey box” since then.

I love how in this thread no one has discussed the propaganda Breitbert-lite-Shapiro is trying to peddle.

Or the original article itself. Which, and I am is sure to everyone here is a shock, severely quoted out of context.

Oh no, I’m afraid you’re mistaken. The Senate trial will still happen, just after he leaves office. This is likely just McConnell’s way of making it not his fault (because he’s about to be minority leader) if the Senate convicts him.

If convicted, they then vote on barring him from public office.

Nope. Impeachment is a Constitutional process for removing someone from public office. You can’t “impeach” someone who’s not IN public office. Oh, these morons in the Democrat Party might try to TRY him in criminal court, but that’ll go nowhere too.

The Senate cannot act on this impeachment until the House formally submits it. Last time, Nancy sat on it for weeks. What she has up her sleeve this time is anyone’s guess. then the ball is in the Turtle’s court. Does he really plan on running again in 2026? He’ll be 84.
After January 20th the trial is moot. Dave is right, read the Constitution, you cannot try someone as the President when he is no longer President … WORDS STILL MEAN SOMETHING.

What happens if the trial is started before he leaves office but in in progress? Chief Justice Roberts will be presiding. He SHOULD call a halt to the trial but we all know his record for inventing the law as he goes along.

Having Nancy, Mitch and Roberts running the show is a real crap shoot … I don’t know which one hates Trump more.

I pray for the President and the Republic every day.