How to avoid the Dem/Media Hoax Virus Scare

Gutfeld: As we prepare to get back to work, let’s confront the obvious obstacles

Not mentioning any names but sure looks like your trust in democrats and leftwing media is direly misplaced.

This thread is played out man, the topic is no longer relevant. I am starting the “Back to Work” thread:

Back To Work (The scare is over) In The News

A fantastic story to start this thread off with: States tell workers they’ll lose unemployment benefits if they refuse to return to jobs

have you started it yet. YES… can’t we all see that this was over played and over stated and hyped to the nth degree. THIS was a virus catastrophe hoax. Back during one of the previous 'DemPanic Pandemics, Podesta and Emmanuels said they had not been ready to push their agenda at that opportunity and that they must be ready for the next one. A Chinese virus came along and the dems stoked it for all it was worth.

have you started it yet. YES

Back To Work (The scare is over) In The News

A fantastic story to start this thread off with: States tell workers they’ll lose unemployment benefits if they refuse to return to jobs “If you’re an employer and you offer to bring your employee back to work and they decide not to, that’s a voluntary quit,” Iowa Gov. Kim Reynolds ® said Friday. “Therefore, they would not be eligible for the unemployment money.” Reynolds also said employers who have workers that refuse to return should file a report with Iowa Workforce Development.

Not mentioning any names but sure looks like your trust in democrats and leftwing media is direly misplaced.

Like so many of the things, you take as truth.

Here we are in May. This is the EPIC failure of this administration:

Apparently, this guy is completely useless and is just looking for a little attention?

Of course, they aren’t. The states have been begging the President to impose the Defense Production Act to supply thinks like cotton swabs, reagents, plastic tips for testing machines, and of course more tests, but it’s an election year and knowing the real data would highlight this administration’s epic failures and. maybe, even Republicans would wake up and realize this administration has failed.

So let’s look at this statement:

Then he goes on:

Back to the funeral home director

Ok, so let’s look at the statistics? I mean, this is something that the producers of this video could have done, but there not really interested in the facts, just “fake news” as you like to call it. Just the opinions of a few people.

It stands to reason that would could look at the death rate of the flu before CV19 and after it’s onset.

The first question is, do flu deaths decline after CV19 starts?

This is little more than a political hit piece and even if it turns out that he’s right, it would be completely by accident.

But what about other non-contagious forms of death? Especially those that are said to be related to and can be confused with CV19?

If you are correct, we should see a sharp drop in pneumonia cases over the same period, right?

Wow, now this is telling and flies right in the face of the narrative in this video and what you claim is true.

Looks to me like the opposite is true? Hmm??? What is to account for the massive spike in pneumonia deaths? Could it be, they are being misdiagnosed?

But let’s not limit the respiratory causes. What about heart attacks, maybe there is something there, maybe those are being falsely classified?

As reported in The Economist

Just looking at New York City, the place where all the alleged fraud is happening and where a large portion of the total people that have died, we can see that hear attacks this year over last year began to increase (vs. last year) at EXACTLY the same time CV19 comes to New York City.

Now, if this video were correct, wouldn’t the number of heart attacks be going down, not up? Isn’t this another example of UNDER-REPORTING of CV19?

Look, the producers of this video, created a propaganda piece and you ate it up because it shows you exactly what you already think.

I spent 5 min on the internet and found real data that utterly destroys this narrative.

In conclusion, are non-CV19 deaths being misclassified? OF COURSE. There are plenty of stories where people (mostly nursing homes) are being loaded into meatpacking trucks because they are dying faster than localities can deal with them and as a result, some will be mis-classified. But just because mistakes are made does not prove that it’s being done deliberately. Saying that hospitals or that cities have an incentive to mis-report, does not mean they will. Lots of people have incentives to do things, but chose not to do those things because they know it’s wrong.

Flu deaths are given in a HUGE range because the true number isn’t known to the last person, but what we can do is look at past data and compare it to current data. If we see significant decreases in other cases of death that have no reasonable explanation, then, perhaps, you might be right, but NO ONE on the right is doing an in-depth look at the stats. You know why? For the same reason that Flat-Earthers don’t do experiments that would prove the earth is flat. Because those experiments would prove the world is round.

Where there’s smoke there’s fire cs.He’s not the only one saying this…people iN the medical business are saying the same thing. Doctors are being banned for their remarks on youtube, twitter and other social media sites. Why is that do you supposed. You REALLY don’t think this is a concern for the health of the expendable (of which you are one) classes, do you? LOL

Where there’s smoke there’s fire cs.He’s not the only one saying this

The data speaks for itself. If I’m wrong, it won’t be because what people say, it will be because there is data out that that shows it. So far all you have is 2 funeral home people we know nothing about (one of which admit he has zero proof) and not a SHRED of actual evidence.

Doctors are being banned for their remarks on youtube

That might be true, but the question is why? You might attribute it to a cover up, or it could be because they are violating ethics rules. I don’t know, but the data speaks louder than any anecdotal claim of any person wearing a lab coat claiming to be a doctor.

Why is that do you supposed.

Data. I showed it to you. Explain it. It’s not an opinion, it’s not, by itself partisan. Explain it. If you can, you’re just sticking your head in the sand and believing whatever you want.

I’m questioning your sources and data. Economist…left leaning. I have data too and I also have what is actually going on in my area. And other people are doing the same. Americans are not as stupid as you think and wish. Perhaps NYC is suffering large losses…then why is that. Got any data on that. yeah…this is a virus…but it is no more devastating than whatever flu is going around. THIS is political and more and more people are coming to that realization.

The Economist isn’t the source, the sources are public and listed at the bottom of their chart.

“Your area” isn’t representative of the nation. No area is.

Americans are not as stupid as you think and wish.

Perhaps NYC is suffering large losses…then why is that.

Because it’s the most densely populated area in the US.

And yet the charts I posted disprove that.

On average 500ish people, a week die of the flu, After Covid hits in April we see flu stays the same or declines and Covid spikes.

It’s also worth noting that John Hopkins reports almost 70,000 deaths whereas the CDC, the site I pulled my numbers from, reports 37,000.

Why? Because they are being careful in their counting. That said, on May 1st the number of deaths between Feb 1 and April 30, was 31,000 and it’s gone up 6000 since then because the CDC is verifying the numbers they are using (they do not have the monetary incentive people claim for hospitals). You are likely to see the numbers in this chart increase by as much as 2 times once investigations are over.

THIS is political and more and more people are coming to that realization.

Oh, there is no doubt this is political. The one thing we can agree on, but the polarization is working in both directions to the detriment of the average American on both sides.

why are democrats using DIRTY NYC as representative of the country

Oh Caroline, Caroline… …the Democrats have one purpose: To destroy Trump. They will destroy any economy and see EVERYONE unemployed to accomplish that goal. Remember, these are the same people that promote murdering babies by the millions and also promote population control. They have no interest in saving lives. Its all about Trump.

csbrowneye is just a mindless drone goose-stepping to the beat of the fascists and the never-Trump media. He has no clue, and he will never accept any evidence you give him. And in turn he will give you fake news media charts and graphs and bury you in them, all for naught.

Just like that, CDC reduces its #Coronavirus death count to 37,000. That’s nearly HALF the total they were peddling. Did 30,000 people spring back to life like Lazarus? No, this seems a “gaffe”—defined as a case of the CDC accidentally telling the truth

Even the CDC says Covid19 is not as bad than the Flu. The left have just one agenda, take down the President. #FireFauci #CoronaVirusHOAX

@dbongino Even the CDC says Covid19 is not as bad than the Flu. The left have just one agenda, take down the President. #FireFauci #CoronaVirusHOAX https://t.co/Xb0maa9PTQ 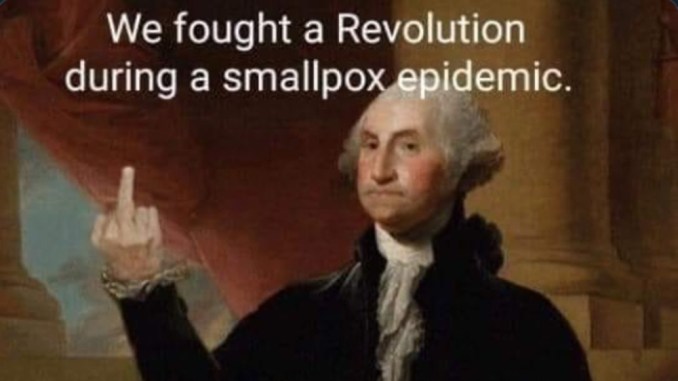 Oh Caroline, Caroline… …the Democrats have one purpose: To destroy Trump.

Trump does that all by himself, but Dems are eager to point out his failures and ignore his successes.

That’s weak and you know it.

That’s not what they said:

COVID-19 is as bad as the worst recent flu epidemics for 65 years and older.

The people for whom it is better, is children, which everyone knows.

Then there’s the part the poster didn’t underline:

For people 18-64, hospitalization is worse than the worst flu.