It Wasn’t Just Trump. The Republican Party is Monstrous

We fooled ourselves, good people.

For the last four years we told one another a necessary story.

Because we wanted to believe the best about humanity, many of us clung to a false narrative of otherwise decent people hopelessly swept up in the fervor of the moment: good human beings intoxicated in the bloody water of a feeding frenzy power-grab, eyes rolled back and unable to do anything but consume.

We wanted to believe it was a temporary condition.

We imagined that if he were gone, that once this messianic monster was removed and severed from them, that those around him would begin to come to their senses and the thick haze of their sycophantic adoration would lift and they would slowly but certainly revert to their better natures.

But now we’re realizing the most painful truth of all the lessons of these years: this is simply who they are.

It turns out that the recently departed and disgraced madman was not the manipulative puppet master animating them into acts of viciousness and cruelty they’d otherwise refuse to consent to, they were the ones pulling the strings all along. What we’re seeing now is irrefutable evidence that these people were not altered by the presence of some singularly evil man—but fully embodied in him.

In the first few hours following the January 6th terrorist attack, a few of them may have been briefly sobered by the loss of life or momentarily afflicted with a sudden twinge of humanity, but that proved only a fleeting moral annoyance they’ve since cast aside. They would not allow decency to fully overthrow their hearts.

They’ve newly declared their allegiance to him once more, defended the violence he instigated, loudly castigated those demanding consequences, doubled down on their social media assaults, and rushed headlong to fill the space he’s left.

And today, the danger is as great as it ever was.

This vile thing is still alive and well: the slithering, lurking, ravenous, toxic creature is simply reconfiguring and reconstituting itself in order to emerge in a less obvious form, one that will not as easily be dealt with—which makes this moment more urgent than any that came before it.

Evil adapts to keep itself alive, and we need to adapt to kill it. We can’t be lulled into complacency by the euphoria of the moment, sedated into inaction by the return of rational, compassionate leadership in the Presidency or distracted by the cheap high of a political win.

We who have kept our eyes open for the past four years cannot afford to fall asleep now. We need to be more diligent than we have ever been, relentless in our collective efforts for justice, steadfast in exposing and condemning this inhumanity and not permitting it to go unabated.

If we allow this thing to remain alive and to gain strength, we will soon find our Republic mortally wounded, and these present victories will have simply postponed our inevitable demise.

But the beauty of the moment is that we know this, that we see with absolute clarity the urgency of this day, that we are capable of transcending political and religious affiliations and assembling around our shared humanity in order to defend it.

We will not fall asleep or be tempered by phony calls for unity or forget what our eyes have seen or allow ourselves to be shamed into silence.

And we will remember that we are not simply terrified potential victims, cowering in a corner just waiting to be devoured, we are fearless warriors for the common good who will not allow malevolence to have the last, loudest word.

Yes evil dies hard, but goodness will not relent. 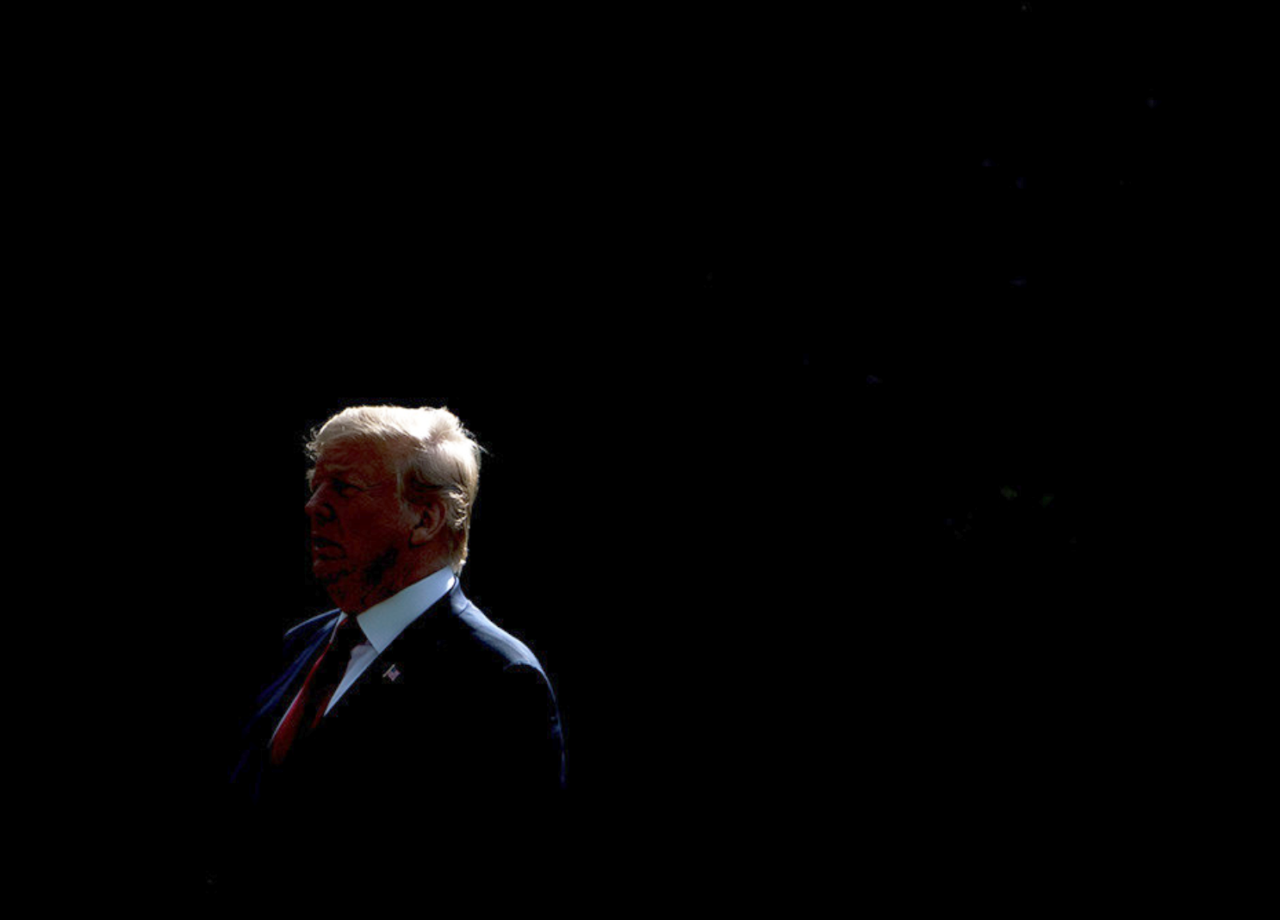 It Wasn't Just Trump. The Republican Party is Monstrous.

We fooled ourselves, good people. For the last four years we told one another a necessary story. Because we wanted to believe the best about humanity, many of us clung to a false narrative of otherwise decent people hopelessly swept up in the fervor...

Yes evil dies hard, but goodness will not relent.

Now why Does Trump earn more Black voters than any modern Republican, with him increasing this lead over 2016? Most Black men supported Biden, but overall, Democrats have been losing Black male support since 2008, according to NBC exit poll data.

Any answer at all?

blacks in cities won the election for Biden. Thank you folks

So you don’t have any answer why he does better? Nothing there to examine?

I didn’t vote for Trump, either time. So how does this effect me?

As someone whose felt squeezed in the last 3 elections, I get to say whatever I like, because I’m not in either Bubble.

If you can’t answer my questions, that’s really on you.

Scott Pelley brings it up, and CBS, NBC, and USA Today reported this very fact about black voters, so I know at least some on the left are thinking about this, even if you aren’t.

That doesn’t answer the question. Why are African-Americans defecting at all, to a candidate derided as rascist?

What is attracting them?

To quote John Stuart Mill " He who knows only his own side of the case knows little of that."

trump attracts a lot of sexists, bullies and jerks, he also appeals to the simpletons who want a strongman.

PS, the 2021 election was still a total blowout against the GOP and Trump.

PS, the 2021 election was still a total blowout

Nope, blowout implies he lost support. He didn’t, he gained it.

And I’m going to need a more thoughtful answer than thinking the worst of your opponent. Interests would be a better line of exploration.

Here’s a suggestion; examine it like realpolitik does, if you know how.

He gained 11 million voters along with performing better with minorities than Republicans before him. Why?

I already answered you. and trump lost the popular vote by millions. you seem to be living in your own reality

Let’s say this: it was probably not Mr Trump’s charming personality, or his deep grasp of the issues involved in steering America into the rest of the 21st Century, that attracted so many living voters, including from minority groups, to him.

It was the idea that here was a man who couldn’t be bought, because he was a buyer, and who, albeit inarticulately and dimly, sensed that the old Republican Party, subservient to its donor class, was not fit for purpose. In other words, a guy who was on the side of the deplorables, now considered by the new snotty Lefties as their social inferiors. Someone who would not keep getting us into endless wars to bring transgender rights to primitive tribes.

We must hope Mr Trump now goes into retirement, and resumes grabbing the private parts of dolly-birds, and that his place is taken by someone else who embodies the reasons so many voted for him.

My nominee is Dan Crenshaw, with Tulsi Gabbard as his VP, advised by Jim Webb.

I’ll bite. I don’t think Trump was anything special or unique. His election campaign tactic of manufacturing the Left as some sort of bogeyman is a copy and paste of Newt Gingrich. Nothing Trump did was inspirational or unprecedented.

What he did achieve, in my opinion, was the complete elimination of apathy in American politics. In prior federal elections, a significant amount of US citizens were simply not motivated to cast their ballot. They might not like Obama, Bush, Clinton etc but still didn’t feel compelled to vote for the alternative. As an outsider, I think that the 2020 US federal election wasn’t a vote for Trump or Biden, but a vote either against Trump or a vote against the left. Not a single person voted for a candidate - everybody voted to put a stop towards what they consider worse.

As a result, more people voted. That more people voted for Trump is about as disingenuous a statement as it is to say Biden got the most votes in history. Both statements are true on paper. I think what is more accurate to say is that the 2020 election had fewer undecided voters in US history than any other…

you’re confused. look at all the democrats who came out in even larger numbers to get rid of him once they knew who he was.

As I have explained to you, I believe in capitalism, and Trump enacted policies that enabled it. He also put America first instead keeping us in trade deals that cost the “deplorables” (Those work hard, obey the law and strive to be self-sufficient.) jobs and opportunities. In other words, if you strived to succeed, Trump strived to get the Federal Government off your back.

Oddly enough, that model was working, including for “the oppressed races,” until Covid came along and ruined everything for everybody except the leadership of the Democrat Party. Contrast that with RINOs like Mitt Romney, John McCain and the Bush family of RINOs. They were disloyal to their base, and showed their true colors by supporting the Democrats very publicly.

Trump was even making significant strides in foreign policy. Strides were made in the Middle East that no one though possible. The European members of NATO were starting to pay their fair share for their defense. North Korea calmed down and the U.S. was serving notice on China that trade would be on a level playing field in the future. Some countries complained about it, but no body likes it when you are taken off welfare.

What was Trump’s biggest problem? It was his thin skin and lack discipline which made him look unpresidential. Trump got the Covid vaccine in place in record time, but was overshadowed buy his rambling press conferences that lacked discipline and were too long. He should have given a 9 PM presidential address about Covid instead of Twitting about it. He should talked about the gravity of the situation instead of blowing off. Blowing it off was his way of trying to avoid a national panic, but it was the wrong approach.

Had it not been for Covid, life would have continued to improve for all Americans except those who live off the Democrat Party Establishment. But now things are headed for crapper. Obama had to exercise some restraint with his far left policies.

Biden is too senile to know that. Instead he is nothing but a puppet of the far left who is just a shell of a president with an Autopen. When he’s gone, in a year or so, a third rate female politician from the California cesspool will be in charge. Dark days are ahead for all of us because these fools are going to take our economy and the free world down the shaft.