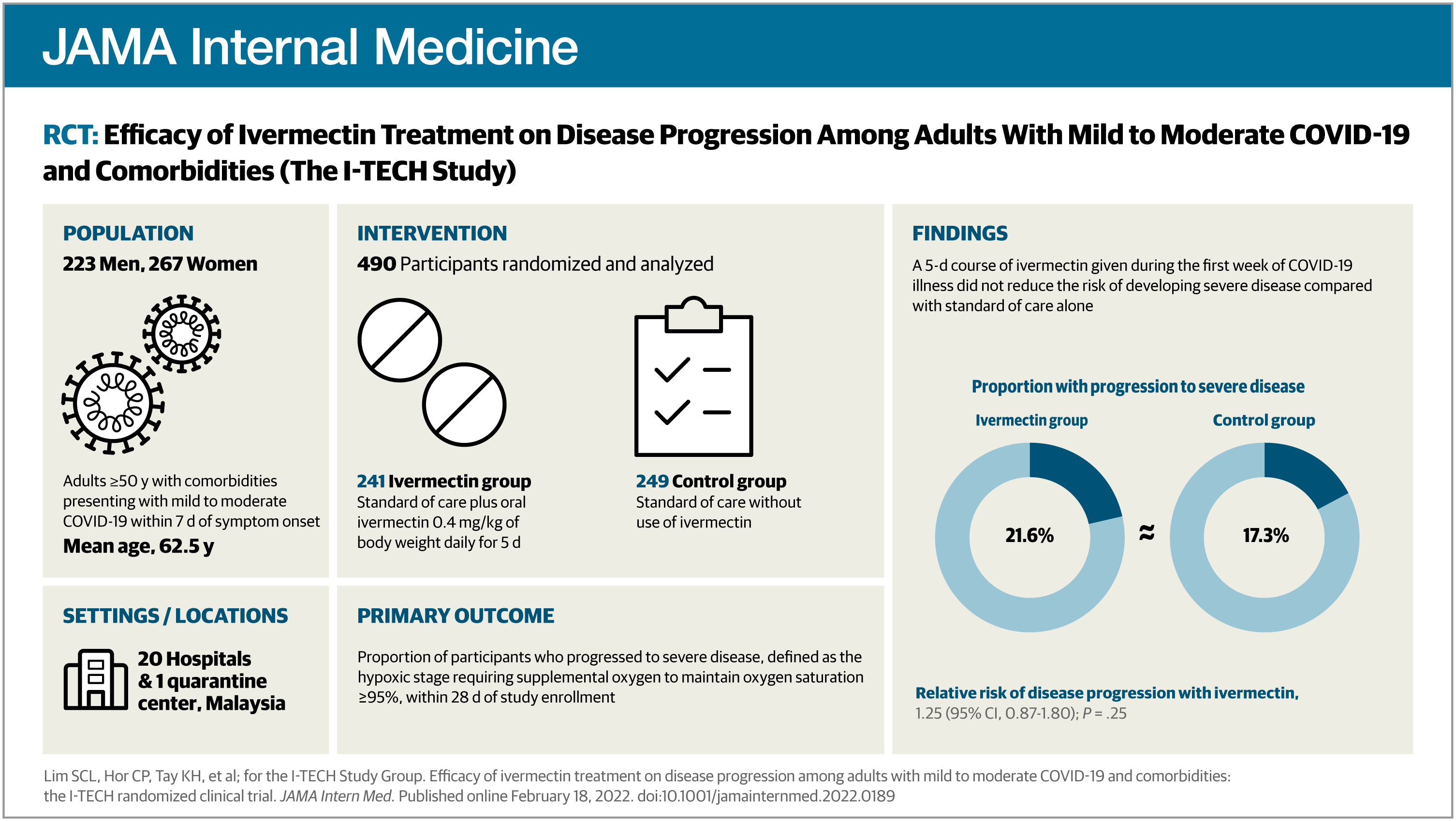 Efficacy of Ivermectin on Disease Progression in Patients With COVID-19

This randomized clinical trial assesses the efficacy of ivermectin treatment in preventing progression to severe disease among high-risk patients with COVID-19 in Malaysia.

Conclusion: In this randomized clinical trial of high-risk patients with mild to moderate COVID-19, ivermectin treatment during early illness did not prevent progression to severe disease. The study findings do not support the use of ivermectin for patients with COVID-19.

Ivermectin for Prevention and Treatment of COVID-19 Infection: A Systematic...

Repurposed medicines may have a role against the SARS-CoV-2 virus. The antiparasitic ivermectin, with antiviral and anti-inflammatory properties, has now been tested in numerous clinical trials.We assessed the efficacy of ivermectin treatment in...

Moderate-certainty evidence finds that large reductions in COVID-19 deaths are possible using ivermectin. Using ivermectin early in the clinical course may reduce numbers progressing to severe disease. The apparent safety and low cost suggest that ivermectin is likely to have a significant impact on the SARS-CoV-2 pandemic globally.

I don’t know the information has been available for like 2 years.

So, looking at the study you referenced I noticed a few interesting things…

It’s interesting, the study was done by researchers affiliated with a group that is campaigning for ivermectin to be approved for COVID-19 use. Despite their connection to the group, the authors declared in the study they had no conflict of interest.

The researchers, despite claiming to have no conflicts of interest, are affiliated with BIRD (British Ivermectin Recommendation Development) Group.

The study you cited states:

“Moderate-certainty evidence finds that large reductions in COVID-19 deaths are possible using ivermectin. Using ivermectin early in the clinical course may reduce numbers progressing to severe disease. The apparent safety and low cost suggest that ivermectin is likely to have a significant impact on the SARS-CoV-2 pandemic globally.”

Oh, that means, this researcher didn’t actually do research on the effectiveness of the drug, rather collected data from other studies and attempted to put the results in one place.

So the value of the outcomes here is really dependent on the studies she and her colleagues cites. The studies she cites have been questioned by people who are well regarded in science. Further, some of the studies cited were not themselves, peer-reviewed.

Maybe the author has a background in virology or something similar?

No, turns out she is a gastroenterologist.

Looks like this study received no official funding and got very little crowdfunding.

Here is another meta-analysis that comes to the opposite conclusions, does not have the problems of conflicts of interest, and goes so far as to employ a “risk bias assessment”.

Ivermectin for the Treatment of Coronavirus Disease 2019: A Systematic Review...

Our systematic review of randomized controlled trials showed that ivermectin (vs control) did not reduce all-cause mortality, hospital stays, or viral clearance

So while I am no expert and really don’t know if Ivermectin is effective, when looking at the evidence it would seem to call into question the authors of your study and their potential conflicts of interest and the quality of the data they used to arrive at their conclusions.

The studies I cited,to my knowledge don’t have the same issues, unless you know otherwise?

Do you consider dr Malone to be an expert or an anti vax shill?

Do you know what I think is the most interesting part of Dr. Malone?

In the 1980s he contributed (significantly?) to the work that would become mRNA vaccines while he was at the Salk Institute, though he proclaims himself the inventor of the technology despite others who claim that, like them, Malone was a contributor.

That said, the interesting part is that people here on RO claim that the tech was invented to quickly and there’s a lot we still don’t know and that’s the basis for rejecting the vaccine, but if Malone invented it in the 1980s as he says then it’s got 30-40 years of research behind it?

As far as Malone, I don’t think he’s actually done any significant work towards the tech since the late 1980s early 1990s, moreover, he makes claims about the dangers of the technology based on what actual evidence?

He worked on mice 30 years ago.

I think, based on what I’ve read about him, that he made some poor career choices, never got his Ph.D. and is butt hurt about other people who are being called heroes for contributing to the success of the lifesaving tech that is the vaccine and he’s not seeing his name and getting the credit he thinks he’s due, so (it appears IMO) he’s willing to tear it all down and get his 15 minutes of fame on Joe Rogan and his Twitter feed. If you can’t be hailed as a hero that created the tech, be hailed as a hero warning everyone how dangerous it is (ironically contributing to people loosing their lives because they believe him and fail to get vaccinated out of fear).

As far as who deserves what credit, whether Malone really came up with mRNA vaccines is a question probably best left to Swedish prize committees and I don’t claim to know.

What I do know is that if mRNA was as dangerous as he claims, scientists from somewhere would have exposed it by now. The idea that all of science is on board with yet another global conspiracy seems unlikely, especially since there’s no reason for scientists in nations that have developed their own mRNA vaccines to lie. Especially in nations that are controlled more from the top down (have less of capitalist cooperate model to deal with).

I think Malone is the perfect example of argument from authority as he has just enough creds to be taken seriously, but not enough to actually do the work to prove his claims. The fact is he hasn’t worked in the mRNA field for 30 years.

There’s a saying that goes, “It’s better to deserve honors and not have them than to have them and not deserve them.” (that was Mark Twain IIRC)

I think Malone wants credit he doesn’t deserve and he’s pissed he came so close to something that really mattered and, I’m speculating here, he probably wishes he’s finished his Ph.D. and deserved the credit he now claims.

How can I say that?

Malone claims to have had the words “inventor of mRNA vaccines’’ on his CV for years. An archived version of his LinkedIn page from 2010 does not include this phrase. It instead claims that he is “known as one of the original inventors of DNA vaccination.” Archives of his webpage also reveal that he only added an “inventor of mRNA vaccine” tab sometime early in 2021.

Is he an anti-vaxxer? No, he admits to having received the Moderna vaccine, though he’s had to make up some BS about it. No, he’s not an anti-vaxxer, he’s just enjoying the attention and money he gets from that rather fervent crowd.

Give them horse paste or give them death. They don’t need no thinking college educated types telling them what to put in their body. If democrats like it then it must be gay socalism. Hey we like breathing don’t we csbrown i pity the fool who would try to live underwater.