I just finished reading Lone Survivor. I have not yet watched the movie that was inspired by the book, that was written based on the real life events.

In short, it was an amazing story of courage, love, hate, and the surprise dashes of humanity in places you’d not expect. I think this book is going to be worth reading 100 years from now, much like the book Sufferings in Africa. It’s a rare glimpse into a world unlike anything most of us ever experience. It’ll make you wonder how death can be so close and real for some and not for others.

I couldn’t come to the same conclusions he was coming to, and wondered if he was secretly torn over the rules of engagement (although he tears into them constantly during the book). For instance, he voted to spare the lives to some unarmed goat herders, and later he decided not to shoot at people he thought were taliban but ended up not being taliban.

As for his criticism of the american media, i agree – they cause more panic and harm than they know.

I thought I’d try to boost your thread just
a tad with a cool pic of the cover of Lone
Survivor. 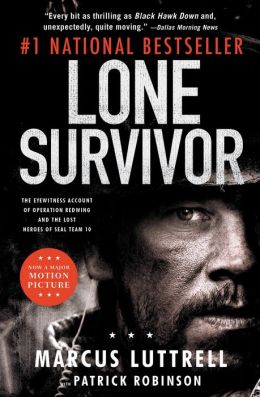 One of my sons went to see the film, he
said it was sobering, and not your usual
Gung Ho military film. He said it had
some Gung Ho, but it was rather sad
as well. I can see why from reading
your OP.

He said it was a very good film, and
well worth seeing.

Bet you’re staying busy … and got a lot of
"irons in the fire."

Thanks for the photo Jack. Now that I’ve read the book, I’d like to see the movie. The book was very sobering, as your son put it. Indeed, “sobering” is perhaps the perfect 1 word description for that book.

If you like Lone Survivor then I would recommend The Outpost by Jake Tapper.

Looks interesting, Zed. I need a break from war / death stories - but will read it someday.

I can certainly understand the feeling of needing a break with reading about war. It is taxing on the spirit.