ONLY FOR REPUBLICANS again

It’s my boy salty cracker, with his own take on our new department of energy employee. If you’re going to comment on this, or be pissed about it, please watch the entire thing so you can be really really upset and offended.

Quentin Tarantino put the “geek scene” in “Pulp Fiction” for the shock value. Now among “Progressive Democrats” there is nothing shocking. The “Progressive Democrats” are so determined to get every sick, perverted group under their tent that they are now driving away some the groups, like the women’s movement, that formerly supported them.

I hope they pay for this. The Democrats are going too far, and they need to be reined in.

Once you get the ball rolling you can’t stop it. Here is a prediction and my predictions always come true-

Within the next three years (probably two years) libs will try to decriminalize and normalize pedophilia, filling it away under nothing more than a sexual preference.

To democrats the definition of right and wrong is whatever the party endorses. The second people realize this they are cured.

Lefty sexiest-smartest-woman-of-the-century and her probably wishing he could die husband.

Man, this guy is hilarious. I don’t care if you’re a democrat, republican, communist, — this video is funny as hell;

It’s not even close

This one really ticks me off. How obvious does obvious have to be? But the NCAA won’t budge.

Feelings are more important than anything ever. It makes me laugh though to see feminists supporting this; it would be like watching Jews endorsing hitler

I wish someone would explain that Santa event. 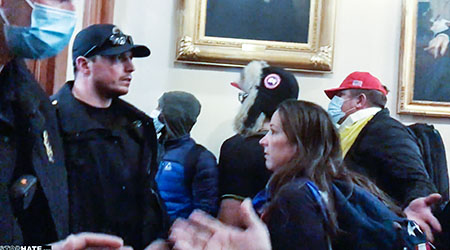 by WorldTribune Staff, January 18, 2022 Video footage from inside the U.S. Capitol on Jan. 6, 2021 showed that Ashli Babbitt tried to stop protesters from breaching the Speaker's Lobby, a report said. The Epoch Times reported on Monday that video...

This one is concerning; don’t know how much longer I’ll be able to post on this site before they kick my door in.

You need a non stop flight to Belarus, Lushenko can protect you from the CIA. Actually watching your video would be fine with getting rid of Patriot Act as Well as ALL Police CIA/NSA/DHS. You worry about crimes people could do what we did before police make direct appeals to courts when crimes have happened and an officer appointed by the court conduct such an investigation on such.

They used to beat any snowden/wikileaks/occupy people I got my foot ran over for being on a property I had permission to be on. A church that sympathized with occupy the cops ran it down a church but not a single GOP member spoke out.

The Gop failed to speak for Muslims
The Gop Failed to speak for Snowden/Wikileaks/Occupy Movement
Now suddenly this vax issue put your party on the wrong side and we never heard the end of it but it would been so nice for you to have our backs especially when my civil rights were violently blatent violated from 2006-2015. @gutsandcasca what do you think about the GOP and selective silence on the survalilence state? THAT IS A QUESTION DIRECTED AT YOU!

THAT IS A QUESTION DIRECTED AT YOU!

I’ve never seen such a crazy cultural shift as now. The country has never been divided like this. From what I see, and I’m not the only one, the left is pushing identity and racial politics SO hard it’s driving a wedge into the USA.

Both parties suck; people suck in general. Never in my life have I been able to see all the lunatic ideologies shoved into my face on a daily basis; and it’s all coming from the left now.

I’ve been screwed over by the police; really bad. I try not to think about it. If I just stay out of trouble and mind my own business I can successfully pretend the police aren’t even there because for me they’re not. I see them everyday but nowadays I have zero interactions that suits me just fine. It’s just now that I realize if I had been living like this my entire life I would never have been to court and never convicted. I think most people would never even notice that bees nest in their backyard if they didn’t walk up and smack it.

I have zero interactions that suits me just fine.

Thats great because the town sheriff came up to ask me what I was doing at a city council meeting. He knows I’ve been getting city council to down size his department for years. I assured him the matter at hand wasn’t in regard to our past differences. So it’s great you can live a life so pointless, so preverbally bland that the police see you as a ghost. I’m politically protected and fighting back like hell, you sat on 9 months and act like a ghost now. I’m a straight up firestarter always have been always will be, and best of all I’m old and there’s not a single law I wanna break. What I wanna break is their grip on culture their legitimacy.

THE QUESTION FOR YOU IS: When people like Snowden were calling out the DHS where was the GOP, you know who was calling it out people like John Oliver, John Stewart, Your guy you posted in the video Russel Brand. You have just found yourself the absolute enemy of the state your name might as well be Amahed and it might as well be September 12th. There have been so many left leaning groups wanting to get rid of American Surveillance you see how he name dropped the ACLU like six times. Yeah I donated to those people I worked with Holly Thayer of the ACLU in both Iowa and Michigan. I tried to slow the snowball surveillance state only two GOP figures ever talked about privacy they were Justin Amash and Ron Paul.

So the silence up until the vax is deafening excuse me if I don’t have sudden tears for you when your people let my people be reamed just like the truckers and J6 for decades. Were no longer protesting were done with occupy we’ve weaponized the courts, turned those same large ABC intuitions into our friends. All we had to do is sell out the the poor in the GOP for immunity of the Poor in the Democratic Party. Sleep now in the fire.

evidently the narrative shifted drastically; because now you have zero left wingers wanting to curb government power. Bush used 9/11 to fear monger people out of their rights; I guess; any rights taken from his administration are not affecting my life.

biden has used covid to take away rights; but the effects of his actions were felt overwhelmingly by everyone.

Trump has created strange bed fellows, the man who handed him the election James Comey was liberal hero when he turned on him.

. Bush used 9/11 to fear monger people out of their rights; I guess; any rights taken from his administration are not affecting my life.

That really sucked for us.

biden has used covid to take away rights; but the effects of his actions were felt overwhelmingly by everyone.

on the right, not the left exclusively the right. Yeah we will your back when you have ours which is umm lemme check my calendar… not designed by our partisan masters. It would be nice for McConnel or Kevin McCarty to acknowledge the past pain of Bush arresting freedom protestors and peace groups which he literally sent the DHS to infiltrate ya know but the only person who has been consistent across partisan lines has been that wacky guy from England Russel brand so when I say I understand what its like being forced to do or accept something you find unconstitutional with great loss to monetary, civil, and property rights I do understand.

For that sympathy to turn into law you would need a unified GOP apologizing for past abuses and agreeing to some least restrictive means to achieve their political goals.

I was hoping the antivax would bring more on the right to understanding Roe V Wade and we could unite in a government that governs less but that didn’t materialize. Infact I got chided by my party for attempting to horse trade on the issue.

I think both parties are like the WWE they pretend to hate each other while taking everything from the working poor. Outside a few genuines like Sanders and Noem.

I think both parties are like the WWE they pretend to hate each other while taking everything from the working poor.

I appreciate the knowledge. I wasn’t aware the GOP had crushed any protests. I’m not arguing; I’m sure you’re being honest. Yes, we are part of the WWE now and unfortunately most people don’t know.

I wasn’t aware the GOP had crushed any protest

Old archived article from 2003
When a free-speech zone is designated by a law enforcement agency, protesting outside the zone can result in arrest, fine, and imprisonment. When they are designated by a university, protest may result in institutional disciplinary action.

so the minute you when back to your car if you didn’t go in a group they would grab ya, get your prints, dna sample, face scan and then send you back to your car. I told you about the horse kicking incident back in 2005 here in Michigan right I left one of the zones to goto my car and they had officers are horses trying to corner us in because they claimed we were protesting outside one of those free speech zones the court later shot down and I kicked the horse officer got a broken sternum from the horse kicking him off.

The jackbooted nazi officers came at me and some others with batons I will never forget that crap to this day I will not rest until they pay for that crap. So next time you resent a mask or a shot remember we had to protest in cages or face arrest.

An independent libertarian writer, however, James Bovard, chronicled George’s splendid isolation from citizen protest in last December’s issue of The American Conservative (www.amconmag.com). He wrote about Bill Neel, a retired steelworker who dared to raise his humble head at a 2002 Labor Day picnic in Pittsburgh, where Bush had gone to be photographed with worker-type people. Bill definitely did not fit the message of the day, for this sixty-five-year-old was sporting a sign that said: The Bush Family Must Surely Love the Poor, They Made so Many of Us.

If you are in some crazy blue state and are facing mask mandates the ACLU will do anything to expand the rights of bodily autonomy even if they have to work with Rush Limbaugh which they did. When Rush was busted with too many oxycontin the ACLU was his counsel arguing the government didn’t have reasonable articulable suspicion. They may be far left but they will never pass up a chance to say F you to the police.

I’m honestly not surprised. Bush himself is a war criminal. 9/11 was staged, and in his mind it worked. Even if half the country didn’t support what he was doing. It makes sense.

But right now we are seeing a repeat of this but in a different light.