President Trump participates in a signing ceremony of the Abraham Accords

A Historic Day for Peace

President Trump participates in a signing ceremony of the Abraham Accords 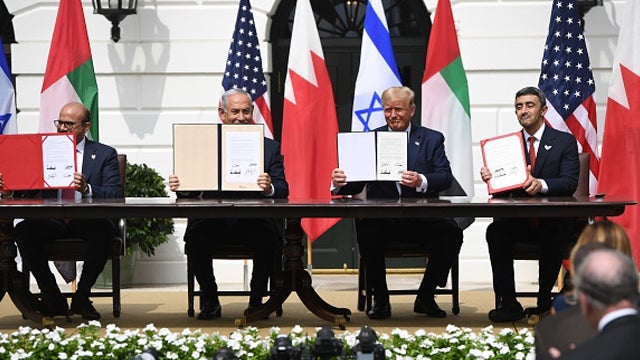 RUSH: Donald Trump has fixed a massive world problem. It's literally stunning. And it will not be properly reported. It will not be given its due respect by the media.

And the Democrat Party was all-in on Israel. Bill Clinton especially. And it was a way to raise money from the American Jewish community. It was a way to maintain support of the Jewish organizations in Washington. Then as time evolved, liberal American Jewish people suddenly became less enamored of Israel as Netanyahu and other right-wing leaders became prominent. And it was a fascinating thing to watch as American Jewish leaders and prominent Democrats began to not support Israel, began to blame Israel for the problems in the Middle East. And they became advocates of the Palestinians.

The Palestinians became the Middle East equivalent of American minorities. They were unfairly treated. They had a lifetime, multiple lifetimes of disrespect shown them. And the Palestinians became no different than blacks and South Africa, apartheid, it was a fascinating thing to watch. And the Democrat Party began to have shifting allegiances toward Israel.

And then we got Obama, and there was outright disgust for Israel for the eight years of the Obama administration, to the point that Obama’s making nuclear deals with Iran, to the point that the Obama administration was attempting to elevate Iran into the dominant power in the Middle East, despite the fact that Iran is not a U.S. ally. Israel is our ally in the Middle East, and the Saudis are also in the ally column. But it was fascinating to watch.

Then you go back to the Clinton nineties, and here is Clinton offering Yasser Arafat, the PLO, virtually everything he wants because presidents wanted this deal. This was going to get them eternal life in history books. Every president — I can start with JFK, and every president going forward salivated over the ultimate peace deal in the Middle East involving Arab nations and Israel.

They all thought that if they could be the ones that made this happen, that they would get eternal praise, eternal life in world history books. And they all engaged in massive efforts, some of them with silly, stupid proposals like Clinton offering the PLO everything they were demanding, which was not good for Israel. Here’s Bill Clinton essentially selling Israel out. And the Israelis had no choice but than to go along with it, because we are the primary ally.

George W. Bush, George H. W. Bush. Barack Obama is the only president who didn’t care about Middle East peace from the Israeli perspective. But Reagan. Jimmy Carter. Ho. I think about all of these presidents and their attempts to come up with the ultimate peace in the ultimate part of the world where there is ultimate strife, the Middle East. And who does it? Donald Trump.

Donald Trump, Mr. Bull in the china shop, Mr. Stupid, Mr. Dummkopf, Mr. Outsider, Mr. Illegitimate, Mister “he stole the election working with the Russians” has come along and achieved something every American president since the 1950s has been attempting to achieve. And how did he do it? He did it by going at it an entirely different way. He did it by leaving the Palestinians out of the process. This would be like trying to establish civil rights relations while ignoring Jesse Jackson and Al Sharpton. And this is exactly what Trump did.

And, lo and behold, it worked. We now have peace in the Middle East, and it’s just beginning. United Arab Emirates, Bahrain. You watch. The Saudis are gonna be signatories to this deal before long. Other Arab nations in the Middle East are going to come along with this. Jordan I expect will sign onto this at some point, King Abdullah there.

The Palestinians have never demonstrated any interest in peace, so President Trump’s approach of leaving them out makes perfect sense. It’s a wonder nobody else figured this out earlier.

If Israel establishes relationships with most of the Arab nations, the Palestinians will be the odd man out and hopefully will feel pressure to think about peace.

The Palestinians have never demonstrated any interest in peace, so President Trump’s approach of leaving them out makes perfect sense. It’s a wonder nobody else figured this out earlier

This is why the establishment HATES Trump. The so called EXPERTS in the diplomatic and national security communities would have advised him to include them (the Palestinians). But he doesn’t even consult them and thats why they want to destroy him.