RBG On Packing The Court

It may be difficult but please try and stay awake!

If Ginsburg can do it …

Ginsburg’s thoughts on packing the court!
(She was against)

Wow. She did not look well at all. But it’s good to know that even she was against packing the court.

I was a member of this forum in 2016, before during and after the “breakdown”. Let’s see how many conservatives will stick to their principles nowadays .

I look forward to the forthcoming mental gymnastics.

Ginsburg’s thoughts on packing the court!

No matter. The freaks on the Left have gone insane on social media and even some fake news venues demanding that Biden pack the court if he wins.

Let’s see how many conservatives will stick to their principles nowadays .

Yes, let’s stick to our principles of preserving freedom. I sure hope President Trump and Leader McConnell preserve freedom by expediting a constitutionalist justice onto the court.

No need to be mean. We need to have opposing views to keep from becoming an echo chamber.

No need to be mean

Have you read this guy’s posts? He hates Trump and he’s a foreigner. He called me a “cunt” four times in a row, which by the way is pretty stupid since I am a normal heterosexual man. 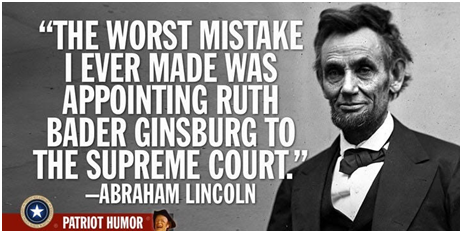 The problem that we – all of us – have, is that the division within America has gone so far, and so deep, that we are beginning to abandon the rules of fair play. Both sides are doing this. It’s inevitable.

Democrats once said, a sitting President – even in his last year – has the right to appoint Supreme Court justices. Republicans said, not if we can stop him, he doesn’t. Now both parties have reversed their positions.

It’s sad, but it’s the result of the – perhaps inevitable – fact that the Court has become the supreme ruler of America. It no longer really just interprets the law – it effectively makes the law.

And it’s getting worse. There are two ways out

Unfortunately, the position of the United States in the world at the moment – a legacy of the last 70 years – militates that we stay together, so we can keep lots of soldiers in various foreign snakepits trying to teach them manners, while, of course, invoking the new Woke mantra, “All cultures are Equal”…

Once we can shake off those chains, and make the Europeans do their own defense – I understand the Germans used to be pretty good at war – then maybe we can settle our own problems at home, which, so far as I can see, require some sort of amicable separation, or even divorce.

And since the ‘deprecation’ of marriage is part of the new cultural orientation our Woke thinkers endorse, then why not extend it from individuals, to tribes, in this case us old stupid deplorable racist reactionaries vs the new socially-just, hip, aware generation?

Actually, the “rule” was that a President SHOULDN’T make any appointments during his/her last year in office IF he/she and the Senate were from opposite parties. In 2016, Biden himself said that Obama SHOULD be allowed to appoint a SCOTUS jurist even though the election to replace Obama was a mere 6 or 7 months hence. Actually, none other than George Washington appointed a SCOTUS judge a couple of months before he left the Presidency, and the Senate approved him. It’s been done multiple times by mutiple Presidents from BOTH major parties in the past 240-odd years when the President and Senate were from the SAME party.

Heal the divisions … go back to 1960s America when we were one nation, both Democrats and Republicans were patriots, no one would dare burn an American flag.

You may want to rethink that?

I remember a poster named JohnWK if I recall, who cited chapter and verse how appointing a member of the Supreme Court is antithetical to a fair and democratic country in an election year. This was in regards to a gentleman named Merrick Garland if I can remember right, There was unbelievable support from people like RET and FC and CL in support of this, I’m just wondering what their stance is now.

The difference was in the 1960s the flag burners were on the fringes. They were anti-war and a relatively small number of them were committed communists. Today the far left has control of the Democrat Party, and openly Communist groups, like Black Lives Matter have corporate support and get great press from the main stream news media. The anarchists and the Communists are now mainstream, and many influential people, like Bill Gates, Michael Bloomberg and worst of all, George Soros, are actively working to put them in power. As Lenin once said, the capitalists would sell him the rope he needed to hang them.

The thing about Bloomberg is that he pointed to Bernie Sanders in a Democrat debate and stated his opposition to socialism. Yet now he’s spending over $100 million in Florida to flip the state for the Democrats. Is Bloomberg really dumb enough to think that Biden will be a firewall against the far left in the Democrat Party? I know many voters are that stupid, but is Bloomberg that naive? One commentator said his problem is pure arrogance. Perhaps, but my view is he’s angling for an influential position in the new administration, sort of like Joe Kennedy during FDR’s time.

Not the same situation at all, Patooka. There have been, historically, 29 instances where a SCOTUS vacancy has occurred during an election year and the President at the time, IN EVERY CASE, has nominated someone to fill that vacant seat. Only in ONE case has a Senate controlled by one party confirmed a nominee proposed by a President of the OPPOSITE party during an election year and that was in 1888 when Grover Cleveland’s (D) nominee was approved by a GOP-controlled Senate. It has NEVER happened that a Republican President’s nominee was approved by a Democrat Senate…not ever. There is even one case when a nominee was put forward by the President AFTER he’d been voted out of office but before the new administration was seated. Remember it’s only been since 1951 that Presidents were term-limited to two terms. That’s when the 22nd Amendment was finally ratified by the States. In 2016, Garland was NEVER going to be approved by the GOP-controlled Senate. Remember that when Obama nominated him, EVERYONE believed that Hillary Clinton was a shoo-in later in the year. Had she won, she MIGHT have nominated Garland, too, but more likely would have preferred to choose her own radical nominee–maybe even Bill or even Obama, insuring a left-oriented majority on the court for decades to come by replacing a staunch originalist with a radical leftist. McConnell was perfectly right to refuse to waste the time and effort to reject the Garland nomination, which certainly would have happened. He’s perfectly correct in what he’s doing today, too. There is no “rule,” “law” or “precedent” that a President’s authority to nominate SCOTUS justices or the Senate’s duty to consent doesn’t apply during an election year. Nobody prevented Obama from Nominating Garland in 2016, but now the left wants to prevent President Trump from nominating HIS choice to replace the late Justice Ginsburg, apparently hoping that Democrats will gain the White House and a Senate majority in November…futilely in my opinion.

Are we getting “nominations” and “senate hearings” mixed up?
Obama did nominate Garland, he just didn’t get a senate hearing.

Thank you for the comment. It’s pretty insightful and highlights my obvious ignorance on the state of affairs. No joke. Obliged.