Science is not religion, it doesn't offer virtue

I know that Economics is often referred to as “The Dismal Science”, but it’s NOT “science” any more than psychiatry or alchemy is “science.”

I’m talking about Origins science…all of it. It’s not observational science. It is the left’s religion.

I’m talking about Origins science…all of it.

I thought you might rather look it up than take it from me. Origins science promoted by the left is any ‘science’ that is not operational or observational science. It is evolution, it is astrobiology, it is exobiology, it is now paleontology, it is environmentalism, global warming, big bang, ufology, etc etc .

I thought you might rather look it up than take it from me. Origins science promoted by the left is any ‘science’ that is not operational or observational science.

I looked up the term, I don’t see anyone who defines it this way.

Origins science includes, according to this source, astronomy and planetary science. Both of these involve observational data. That’s what telescopes are for.

It’s called Cosmic background radiation, essentially, a baby picture of the universe nigh-frozen in time. We can see it, and it’s some of the oldest light in the universe.

Remember, light takes time to travel. When you look up at the stars, you’re seeing what many of them “were” thousands, millions, and even billions of years ago.

Which means it’s the same as looking back in time. We can see what parts of the universe were like long before we got here.

I didn’t think you’d recognize the difference. You can’t get close to it, you can’t duplicate it. Observing something and then having to theorize on it is not observational/operational science.

What distinguishes origins and operational science?

We often speak of a distinction between origins and operational science. What distinguishes them? Does God see it any differently from us? CMI’s Lita Cosner discusses these questions in today’s feedback:

J.C. from the United States writes:

Question: From the point of view of our biblical Creator and rightful Judge, what is the essential distinction between operational science (dealing with experiment and observation in the present—Science that puts a man on the moon) and origins science (purporting to explain origins and all things “prehistoric”, notably the evolution of all things?)

As we explain in several of the items in our Science Q&A, the distinction between origins and operational science is that the latter deals with things that are repeatable and observable. If I tell you that water boils at 100 degrees Celsius, well, you can test that for yourself as many times as you like. All of operational science is like this in principle, even if it gets a lot more complex than that.

Origins science takes what we can find out through operational science and tries to apply that to the past to explain what we see in the present. Criminal forensic science (popularized unrealistically by many popular TV series) for instance, tries to use the evidence to reconstruct a crime to figure out what happened, and who committed the crime. To a much larger degree, origins science tries to take what we know about biology, chemistry, and geology today, and extrapolate back to try to find out things about the earth’s past. (see CSI and CMI and CSI and evolution).

Origins science is trying to answer historical questions: how did we get here, what happened in the past to give us what we have today? And origins science is not completely invalid; our own creationist geologists and cosmologists, for example, engage in a sort of origins science, for instance when Michael Oard hypothesizes that certain conditions during the Flood led to the dinosaur eggs, tracks, and bonebeds that we see today (see The extinction of the dinosaurs and Dinosaur Challenges and Mysteries). The difference between evolutionary origins science and creationist origins science is that creationists realize the historical nature of the questions, and therefore turn to a historical text—i.e. Scripture—to inform them about what sort of big historical events may have caused what we see today (see Biblical history and the role of science). There is still debate among creationist scientists, for instance, about things like plate tectonics or about what stage of the Flood certain strata represent, but for us, the Bible gives us a historical ‘scaffold’ on which to hang our ideas (see Flood models and biblical realism).

It would be common for evolutionists to say that this dependence on the Bible to give us our historical framework for doing operational science biases us in a way that’s unacceptable for true scientists. But the evolutionary scientists have their own ‘scaffolding’ on which they hang their ideas. For instance, there are many different ideas about the relationships between various groups of animals and how they are related to each other, but all of them assume millions of years of evolution. Not even findings like DNA in a dinosaur leg bone, or the numerous living fossils , or the evidence that the genetic codes of multi-celled organisms are accumulating errors at an alarming rate which dooms them all (including us, except Jesus has promised to return first) to extinction—none of these findings make them question their ‘scaffold’; they can even absorb these into their ‘scaffold’.

So in other words, operational science is the stuff that requires lab coats and goggles; when you run an experiment and collect data. Origins science is when you try to apply those results to explain what happened in the past to explain what we see in the world today. And surprisingly to some, origins science is not limited to godless evolutionists; it’s something that creationists can do, informed by the historical record of Scripture, to the glory of our God and Creator.

Does God recognize this distinction between operations and origins science? In one sense, all truth is God’s truth, so there’s no distinction at the level of correspondence with reality between historical truth and scientific truth. Nevertheless, even God recognizes the difference between natural regularity (which operations science investigates) and history (which origins science investigates). God testifies about certain unrepeatable events in the past (e.g. Exodus 20:2, 11). Neither can we know God apart from historical revelation—His acts in history (including his authorship of the Bible) accurately reflect His eternal and unchangeable nature sufficiently for us to know Him. Moreover, God can’t judge us without appealing to history—all our relevant acts will be past events from the perspective of Judgment Day. But neither can we act as we do apart from God sustaining the universe in a way amenable to operations science investigation (e.g. Genesis 8:22, Colossians 1:17). Both science and history are investigations in time —they are temporal activities that operate with respect to this creation. God genuinely interacts with us, and grounds us, in time (both immediately in miracles and witness, and mediately in ordinary providence), though He in himself is not subject to time. Therefore, He comprehends and validates the conceptual distinction between history and science essentially as we’ve made it on the website even if He is not definable by them in himself.

There are “operational” components to estimating the age of the Earth; Geology, radiation decay, study of craters and the moon samples.

Secondly, there are “operational” components to Evolution; we can turn on ancient genes in animals from their long dead ancestors.

There’s no reason for those genes to be there, unless they’re related. And Evolutionary theory predicted those genes would be there.

Young earth creationism is just an excuse for bad theology. Presuming they understood what the Bible described, instead of trying to alter their interpretation to meet the evidence.

color me surprised. LOLOL They call your attitude closed mindedness.

Secondly, there are “operational” components to Evolution; we can turn on ancient genes in animals from their long dead ancestors.

got a link for that?

color me surprised. LOLOL They call your attitude closed mindedness.

I don’t trust categories that are agenda-driven.

It makes no indigenous sense to the people who use those weapons or the industry. It’s a made up term to push an agenda.

Similarly, the Young creationists categories, make no sense when you actually examine the science being done.

There does exist a separation between Experimentalists and Theorists. But no science falls into one or the other. It always has both.

Thus, calling a science “unoperational”, is just a farce. A made up terminology, meant to push an agenda. 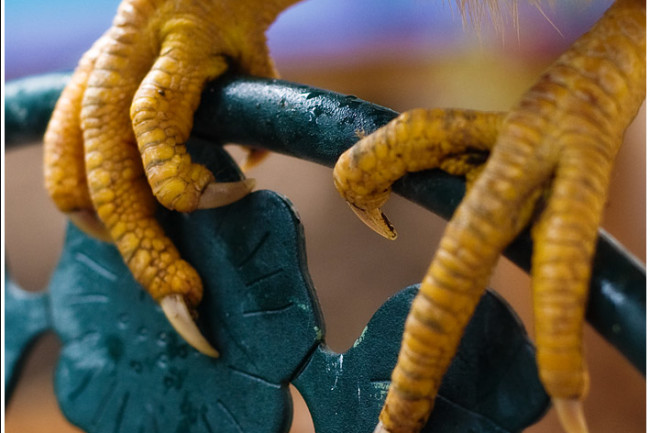 Genetic Tweaks Are Revealing the Dinosaur Traits in Living Chickens

And in your world, the gene that was “altered” simply could NOT have been a gene present in early chickens, huh? It MUST have been present in your phantom “dinosaurs” that “evolved” into chickens.

And in your world, the gene that was “altered” simply could NOT have been a gene present in early chickens, huh?

Why would a chicken and long dead dinosaur have the same gene that produces the same bones, when chickens don’t use them?

Too much of a coincidence.

By definition, all birds are dinosaurs. Just like Crocodiles.

Where have you seen a “gene” from a long-dead dinosaur? At least TRY to sound like you know what you’re talking about.

BS. What the story says is that scientists EXTRAPOLATED the genomes of turtles and birds and ASSUMED that they were both related to dinosaurs.

BS. What the story says is that scientists EXTRAPOLATED the genomes of turtles and birds

They have the genomes of Birds and Turtles, they didn’t “EXTRAPOLATE” them, they used those two to then extrapolate the genome of the dinosaur.

And the logic is pretty simple; We know which genes create aspects of a creature. If you find that same aspect on a dinosaur, and it’s clear in their lineage that these two are related, you know that gene goes back to them.

And btw: we also know how to pick out how old genes are. We know the genes we’re looking at, are old enough to have been around in the time of the dinosaurs.

The trouble for you still remains; what’s a gene that the Chicken doesn’t use; to create legs we do see on dinosaurs, doing in the Chicken’s genome?

A gene older than the Chicken itself?

LOL. That’s what I SAID. You (and the “scientists”) extrapolated the bird and turtle genes to be holdovers from the dinosaurs. We don’t HAVE dinosaur genes available to us for comparison, regardless of how many Jurassic Park sequels come along. No one knows how old any specific gene is…period. They can surmise its age but they have no ACTUAL ancient genes with which to compare it.

No one knows how old any specific gene is…period.

How old are the genes in humans?

The oldest known functioning gene is found in the enzyme glutamine synthetase, which has a vital role in cells.

Admit it Dave: you should have looked that up before commenting.

Laziness gets you no where. Period.