In the wake of 2 more mass shootings in a week, are conservatives open to better gun control yet?

At an absolute minimum, I want to see assault rifles surrendered and banned.

At an absolute minimum, I want to see assault rifles surrendered and banned.

So out of an estimated 20, 000 Gun Laws already on the books … the criminal elements will abide by this one?

How about assault bats? 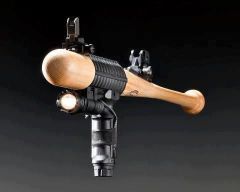 Assault weapon is a made up word used by people like you, (troll, leftist, liberal, radical<–take your pick) to scare up Illegal gun laws!

To be very clear of where I stand, this is going to be a Very long but not an in-depth study of my stance on cry babies and gun laws.
(Don’t miss the information provided on the very last linked page)

Every time there is a “mass shooting”, it gives the gun grabbers another opportunity to write new Unconstitutional Laws and another chance to take away the law abiding citizen’s right to Self protection!

These laws will only apply to people who are law abiding, who have never hurt or killed anyone!
Criminals don’t follow laws!

When a mass shooting or a crime of any kind is committed … That crime should be prosecuted in the courts!

Congress has no right to create laws to punish the law abiding citizen for the actions of another!

A crime was committed by a person so prosecute the crime and the person who committed it!

Punishing the law abiding will not prevent future crimes!

In Marbury v. Madison the Supreme Court announced for the first time the principle that a court may declare an act of Congress void if it is inconsistent with the Constitution.

The first words of the Bill of Rights say that Congress shall make no law restricting certain rights.

In United States v. Cruikshank (1876), the Supreme Court ruled that, "The right to bear arms is not granted by the Constitution; neither is it in any manner dependent upon that instrument for its existence.

The Second Amendment means no more than that it shall not be infringed by Congress, and has no other effect than to restrict the powers of the National Government."

McDonald v. City of Chicago, case in which on June 28, 2010, the U.S. Supreme Court ruled (5–4) that the Second Amendment to the U.S. Constitution, which guarantees “the right of the people to keep and bear Arms,” applies to state and local governments as well as to the federal government.

It is settled that the Second Amendment protects an
individual right to keep and bear arms that applies
against both the Federal Government and the States.

If Heller tells us anything, it is that firearms cannot be categorically prohibited just because they are dangerous.
(Or scary looking)

Just as the First Amendment protects modern forms of communications, and the Fourth Amendment applies to modern forms of search, the Second Amendment extends, prima facie, to all instruments that constitute bearable arms, even those that were not in existence at the time of the founding.

Heller defined the “Arms” covered by the Second Amendment to include “‘any thing that a man wears for his defence, or takes into his hands, or useth in wrath to cast at or strike another.’”

The vast majority of people who believe that the government has the right to regulate gun ownership by passing new laws … have a poor understanding of our Constitution!

What both sides fail to understand is that the Second Amendment grants no such right, in fact, the Constitution grants no rights at all!

What the Constitution does do is identify what powers the people grant to the government.

That is why Marxists, Socialist, Progressive Democrats, et al. have such a disdain for our Constitution …
It is a limitation on Government not a limitation on We The People.

Read the Second Amendment closely.
Nowhere does it state that the people have a right to bear arms but rather that the government cannot infringe on that right.

The framers of our Constitution believed that our right to bear arms is a natural right , not a right to be given to us by government.

This is … and should have always been the way our 2ND amendment Right To Bear Arms needed to be presented!

The courts cannot overrule the Constitution even though the ignorant masses have allowed them the freedom to do so!

If the government is allowed to dictate what we are ‘permitted’ to own, to defend ourselves, how exactly are we able, if ever, to defend against the tyranny of that government!?

Just look at how the Democrats running for President are threatening to ‘erode’ our gun rights even further!
(If not downright confiscation!)

For those interested please see the following:
(No ads or popups.)

Page 2 should prove interesting to those who think the 2ND only meant that we were limited to carrying muskets! So, you seem to have a lot of thoughts on this topic. Given this is a uniquely American problem, how do you suggest we stop further mass shootings from occurring?

So, you seem to have a lot of thoughts on this topic. Given this is a uniquely American problem, how do you suggest we stop further mass shootings from occurring?

You don’t.
Criminals will always have their “assault weapons”!
(See a problem here?)

Until man’s sinful nature is done away with, there will always be evil in the world.

You cannot create a fantasy world with tyrannical legislation!

Just as if everyone turned in their guns, there would be … mass knivings.
Mass getting run over by trucks.
Mass stonings.
Mass bombings.
etc. ec.

It is MAN who is the problem … not the weapon!

Well, there it is. If you’re not willing to attempt to mitigate mass shootings, I guess I don’t care what you think on the topic. I do appreciate the honesty though.

If you’re not willing to attempt to mitigate mass shootings, I guess I don’t care what you think on the topic.

I gave you an answer.
It’s just not the one you want to hear!

20,000 Illegal gun laws are already on the books!
That’s not an “attempting to mitigate” attempt enough for you?

How are new Illegal laws going to stop a criminal from doing a criminal act?

A lock does no more than keep an honest man, honest.

You are a troll!
You don’t want to have logical discussions!
You want to argue!

The Democrats have been using the Atlanta shootings as another excuse to stoke up racial tensions, this time between Asians and Whites. As it turns out, the gunman was nut with a sexual addiction, but all of the “progressive” TV networks reported was “racially motivated” before they even had the facts. There should be penalties for journalism misconduct just like there is for judicial misconduct. The best penalty would be if their ratings went to zero until they start reporting the news responsibility.

The Democrats figure they will profit from as many racial divisions as they can create. It’s disgusting.

No, if not gun laws, I want to know how you propose we stop this. How would you attempt it?

You are repeating yourself.

Of course … you knew that already!

Well, you didn’t propose anything. So I figured you probably missed it

I actually support background checks, and conservatives will jump on me for saying that. But I know I’m safe because the “progressives” will tell me get lost anyway. “Progressives” have no interest in dialog or compromise. They jam everything down the throats of those who don’t mouth what they want hear.

I think that’s a great start! There should absolutely be universal background checks for every firearm sale. That alone could go a long way towards keeping guns out of criminals hands.

No, not every one. If you sell a gun to you son of you next door neighbor, the answer is no. This gets into the big brother argument, but I know you like big brother until he effects your life.

Okay but do you understand that the type of transaction you describe is exactly how criminals who can’t pass background checks get ahold of guns? You can’t say “criminals will get guns anyway” and then explicitly authorize the main way they get guns anyway.

I want to see everything banned. Literally everything except cnn and the Democrats

I suppose you have some way to stop mass shootings then? Please, do share.

I know it’s satire, but I always find The Onion’s update of this article (they’ve been doing it for years) painfully poignant

‘No Way To Prevent This,’ Says Only Nation Where This Regularly Happens

BOULDER, CO—In the hours following a violent rampage in Colorado in which a lone attacker killed 10 individuals and injured several others, citizens living in the only country where this kind of mass killing routinely occurs reportedly concluded...

@Gene believes that criminals will report all of their private gun sales to the government. He also believes that Joe Biden is Santa Claus and the Easter Bunny, depending on the season.

Come to think of it, maybe he does think Joe is Santa and the Easter Rodent given that Joe has promised to give everything to everyone, including illegal aliens, except successful American citizens, who pull their own weight.