Statement on TMTG by the 45th President Donald J. Trump October 26, 2021 Last week, I announced the creation of a major new company that will challenge the dominance of the Big Tech giants and Big Media bosses. Today I want to explain more about what I am doing and why. For me, this endeavor is about much more than politics. This is about saving our country.

America has always been a nation of smart, spirited, and independent people who take pride in thinking for themselves. We admire those who aren’t afraid to speak their minds, or go against the tide. Yet suddenly, we find ourselves being censored and dictated to by a small group of self-righteous scolds and self-appointed arbiters of what everyone else is allowed to think, say, share, and do.

Nowhere is this censorship more dangerous and brazen than on social media, the public square of our times. We have seen renowned medical doctors being banned from platforms for contradicting “health authorities” or questioning the political narrative of the moment. We’ve seen scientists blacklisted for sharing evidence that the pandemic began in a Chinese lab. We’ve seen vital reporting about Joe and Hunter Biden’s foreign business dealings—information that voters needed and deserved to hear—ruthlessly suppressed and erased from the internet just weeks before a presidential election. And as everyone knows, we’ve seen a sitting president of the United States effectively silenced by a small oligarchy of tech titans and “mainstream” media corporations.

The corruption of these platforms cannot be ignored. We have fallen far down the “slippery slope” of censorship in our country, and the topics that Americans are increasingly forbidden to debate are among the most important issues of our day.

This wildly aggressive censorship and “cancel-culture” is not only un-American—it has direct, real-world consequences. Most obvious are the many catastrophes unfolding under the current administration: the calamitous Afghanistan withdrawal, the disaster at the Southern Border, runaway inflation, and the multi-trillion-dollar socialist spending nightmare, just to name a few. In a country that had free speech and a free flow of information, none of this would ever have happened—and no one understands that better than the people doing the censoring.

Yet the silencing and cancellation also affects our country in more subtle, but equally destructive, ways. How many Americans no longer trust a word they hear from their leaders, media, or public health officials, because the one thing they know for certain is that they are not getting the full story? How many ordinary citizens have sadly come to resent their neighbors, feeling that they now live in two entirely different realities? And how many millions of Americans silently oppose so much of the nonsense being inflicted on us, but see the heavy hand of the cancelers, and conclude that their voice can make no difference, or that the cost of speaking up is just too high?

The new age of censorship is a disaster for our country. Things were far better in the days when we had our debates fiercely and openly, and then we could move forward together, as Americans, with both sides knowing that their voice, and their best arguments, had been heard.

The more I looked into this problem, the more I realized that to restore free speech, a major new platform would have to enter the market, with an ironclad commitment to protecting vigorous debate from all sides. But since it is both hard and expensive to build a new platform totally independent of Big Tech’s infrastructure, it would have to be an extremely well-funded, multi-year undertaking. In addition, such a platform would need the ability to rapidly attract millions of users, welcoming not only Republicans to join, but Independents and Democrats as well.

It’s a tremendously difficult set of challenges—and I realized I might be the only person in America with the megaphone, the resources, the experience, and the desire to make it all happen. So with the same “can-do” spirit that has always allowed Americans to persevere, that is exactly what I am doing.

To take on Big Tech censorship, we are creating a “Big Tent” platform: Truth Social. We are inviting people of all political stripes, and all different viewpoints, to come and participate once again in the great American debate. That’s what our country is supposed to be about. Unlike with the Big Tech platforms, there will be no shadow-banning, throttling, demonetizing, or messing with algorithms for political manipulation. We will not be treating users like lab rats for social experiments, or labeling alternative views as “disinformation.” We will not silence our fellow citizens simply because they might be wrong—or worse, because we think that Americans “can’t handle the truth.”

It will be as free, vibrant, lively, and diverse as America itself. And Truth Social is only the beginning of our plans. The Trump Media and Technology Group will also be launching an on-demand video streaming service that competes with the increasingly “woke” and politicized ‘entertainment’ programming created by Big Tech and Big Media players. TMTG also sees opportunities to create “cancel-proof” alternatives in other key areas ranging from web services to payment processing.

In the end, a small number of powerful people who all think the same and wish to silence anyone who thinks differently cannot be trusted to control almost every major media, technology, and entertainment company in America. I am determined to break their chokehold over the voices of the American People—not just for myself and my own supporters, but for the United States of America! 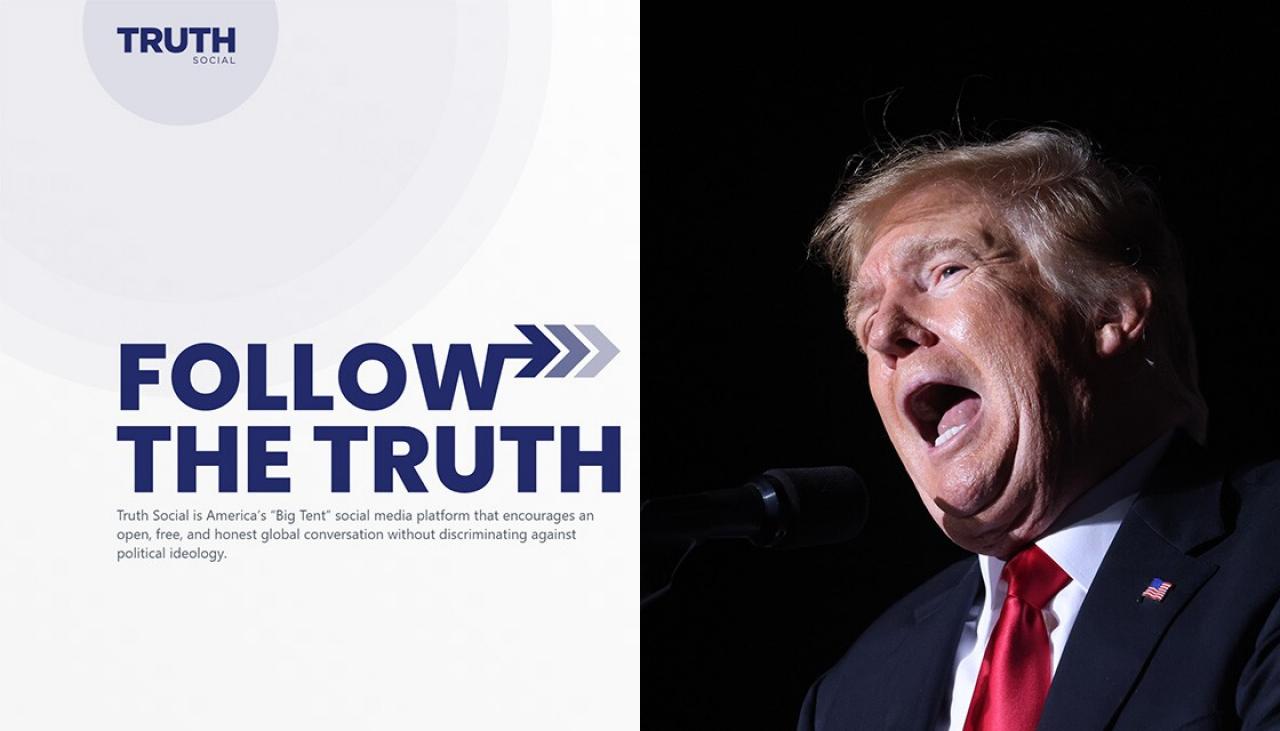 "The Taliban has a huge presence on Twitter, yet your favourite President has been silenced."