If Trump gets a second bite at the apple in '24 (which I hope he does), he needs to sharpen up his hiring and firing skills. Here’s a new addition to the long list of anti-populist turds from his 1st administration:

I believe he’ll get his shot but it will prove pointless. I’ve said it before; whatever the democrats did to win this election will be reproduced from here on out. No Republican will ever win again. I’m talking ever. It’s going to be democrat rule from here on out so get used to it.

I agree with @gutsandcasca that a second Trump run will be useless, but I’m not so sure that he can win even a fair vote count. The media has succeeded in vilifying the Trump brand to the point where the uninformed citizens, who vote, will associate negativity with the name.

Adam Schiff will start impeachment proceedings BEFORE the election, and the news media will make his “star chamber” the top story every day.

If you think that I have turned into a modern-day Jonathan Swift, look at Pelosi’s January 6 commission. That is a Trump impeachment hearing is disguise.

Ron DeSanctis will be the next target of a Democrat pre-election impeachment proceeding, followed by Greg Abbot and Kristi Noem.

All the while, the Democrats will be cleaning up their Xerox machines to print more ballots and updating Covet so that it will still be with us in 2024. If they don’t pass their Federally mandated “voting rights bill” for dead people and multiple ballots per Democrat voter, they will need more mail-in ballots made possible by the 10th Coved pandemic.

Hopefully Kyrsten Sinema and Joe Manchin will remain firm in their opposition to filibuster elimination. Without their support the election “reform” bill doesn’t have a snowball’s chance in hell of retaining the House or Senate in '22. Even if they succeed in passing the election “reform” bill the high court could/should declare it unconstitutional.

Meanwhile, ordinary folks are driving the RINOs out of state parties from the precinct level up and angry parents are FINALLY going to get interested in and run for local school boards.

Gas, food and general inflation are crushing millions of Americans.

I think it’s gonna be a rocky road but I see light at the end of the tunnel. They will try to extend the covid hoax (and cheat by mail) forever but there’s substantial resistance growing. Border security, jobs, crime, CRT, trannys in girls sports and general gender mischief … they can not walk back all of these and all are unpopular with normal people.

Why do you guys even want a second Trump term? Don’t you have anyone else to try?

Trump was right on many of the issues. Unlike your side, which has degenerated to socialism and giving in to every pressure group, like the teachers unions, the defund the police crowd, open borders, let violent criminals out of jail advocates and transsexuals, Trump stood up for those who work, save and play by the rules.

Trump is too rough around the edges, which will make it hard for him to expand beyond his base, but he beats everybody your side has to offer. You guys have got nothing but the likes of Sanders, Harris and Biden. You guys don’t have a decent candidate who could get the Democrat presidential nomination.

If there were a good Democrat candidate, he or she has no chance to win in your party. A good candidate would question the $3.5 trillion boondoggle. You can’t do that in the Democrat Party. Diversity of opinion is not allowed.

I probably will not vote for Trump if he has opposition in the primaries, but I will definitely vote for him in the general election if he gets the nomination. I see nothing on your side other than wokeism and fiscal irresponsibility.

I probably will not vote for Trump if he has opposition in the primaries, but I will definitely vote for him in the general election if he gets the nomination.

If Trump runs for re-election the decent GOP candidates (DeSantis. Cruz, Rand Paul &ct.) will not oppose him. There might be some weasels like Romney, Graham, Rubio who will LOSE in a general election since most of the Trump base will stay home.

If Trump doesn’t run it will be a huge field. My money is on DeSantis but anything can happen.

Trump is too rough around the edges, which will make it hard for him to expand beyond his base

I don’t agree with your premise, he has room for expansion with traditional democrats who have lived in a Trump economy and a Biden economy, plus Blacks and Hispanics.

The only way Trump wins the 2024 Election will depend on two factors.

#1. The election will be honest. This is still up in the in the air because of the House Bill and Senate bill #1, which if passed, will rig all elections for the Democrats from this time forward.

#2. The Democrats are so bad that the electorate votes for Trump because “He’s not Biden” or any other Democrat you care to name.

Biden won this time because “He was not Trump.” The news media and Trump, by his lack of self control, have greatly damaged his brand.

We can respectfully disagree on this subject, but you have to have more than just Trump Republicans to win an election. That is especially true given that the the Democrats could nominate Porky Pig for President, and he would automatically win on the whole west coast and all of the northeast, except maybe New Hampshire, plus Illinois. The Democrats have at least 175 Electoral votes in their back pocket before the elections are ever held. They don’t need to cheat to win those votes.

#1. The election will be honest. This is still up in the in the air because of the House Bill and Senate bill #1, which if passed, will rig all elections for the Democrats from this time forward.

Agreed. besides SB1 there is the possibility that they will be able to extend the ChiComFlu hysteria another 3 years and justify a massive “cheat by mail” scam without passing SB1.

I think the general public is becoming immune to the MSM hype and the nothingburger impeachments. He won in 2020 by a bigger margin than 2016. In 2016 he was an unproven quantity, in 2020 people saw he delivered. 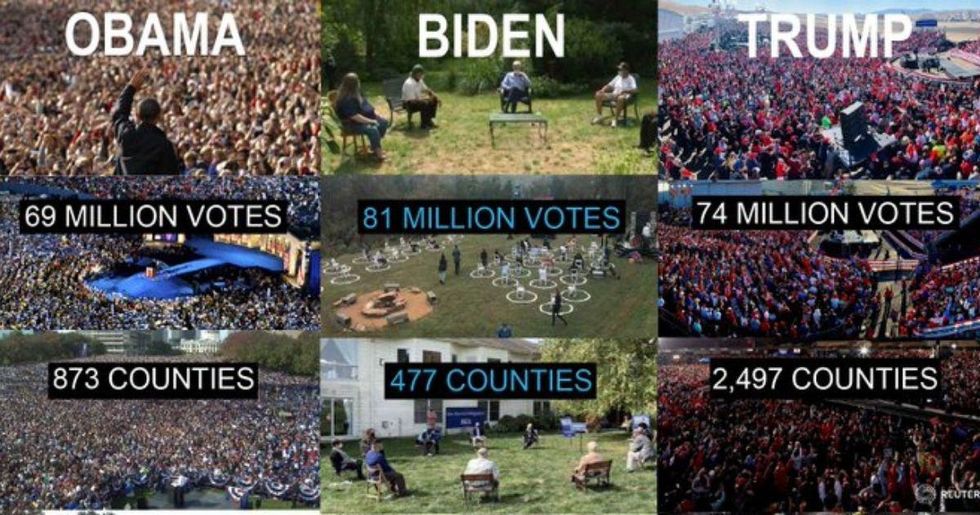 One more consideration: Any Republican, other than Trump, will follow the politicians prime directive: “Get re-elected”. Trump will be unleashed to fix what needs fixing, fire who needs to be fired.

Trump’s “revolving door” style of management can work well in a corporation involved in a very fluid market with a strong leader at the top. It does not work well for the Federal Government where the average citizen thinks that a good presidential administration resembles a watermelon patch. The vast majority of Americans don’t understand that Washington is a swamp that full of self-serving creatures who are mostly concerned with feathering their own nest.

There were some people, who were working for Trump, who deserved the ax. FDI Director Comey comes immediately to mind together with General “Mad Dog” Mattis who proved to anything but a lap dog for the Democrat politicians. There is a difference between giving the boss constructive criticism in private and stabbing him in the back in public.

One more consideration: Any Republican, other than Trump, will follow the politicians prime directive: “Get re-elected”.

I think Dan Crenshaw would be better than that. He earned his wisdom the hard way, losing an eye.