Now, I’m not saying it was done on purpose, but for all the people out there that cling to right-leaning conspiracy theories, this just seems ripe for a conspiracy theory all its own…LOL

Seems either the right is secretly pandering to white supremisists or they like to troll Liberals or a little of both, maybe?

Either way, these sorts of gestures will be taken by white supremacists as sights the right is on their side, especially since the people responsible refuse to acknowledge these things are closely related to what they appear to be, even if by mistake.

The statue was made in Mexico…I swear, you can’t make this stuff up.

…
While people are at it, if you look up at the clouds, you can see all sorts of shapes that resemble things. And the clouds probably have more meaning.

You ever look at a car while you’re driving down the street? They have wheels. Just like the trains that delivered the Jews to the death camps.

I think we need to look deeper into this wheel thing; evidently the entire world is controlled by nazis.

A liberal woman at my job showed me pictures of the golden Trump statue. According to her, Republicans are idol worshiping heretics willfully rebelling against god.

I don’t agree with her, but I can see where she is coming from. Who came up with this idea and who decided to run with it?

While people are at it, if you look up at the clouds, you can see all sorts of shapes that resemble things. And the clouds probably have more meaning.

Again, I’m not saying it was done on purpose, but you cannot deny that’s what it is.

You can’t deny that democrats who drive cars are riding on a torture device. They may not know, but we know.

It may be unfortunate, but it definitely deserves a discussion in a republican forum.

Let’s compare the actual literal shape of everything with anything negative that we can find so we can manufacture reasons to be offended and uncover a huge conspiracy.

Let’s compare the actual literal shape of everything with anything negative that we can find so we can manufacture reasons to be offended and uncover a huge conspiracy.

This coming from a man on the right side of our politics, and while you may not beleive QANON theories, many who share you ideology see all sorts of signs where there are none.

Now, to be clear, I don’t believe the shape of the stage was intentional, but I do believe it perfectly resembles a symbol now carried by right-leaning neo-Nazi groups.

And hot dogs resemble gun barrels. Some gun owners must be pig supporters.

Yep, keep trying to find ways to fool yourself, I won’t stop you.

First, Hitler used to type to you? Dam, you’re much older than I thought, Second, I doubt he used English given that he was German.

@csbrown28 is a joke and a fraud. He has no interest in honest debate. I tried to discuss the Biden open border issue with him. He played dumb and said he had not heard about the issue. He posts that because that is his only defense.

A company that designs stages for liberal groups designed this one. He picks up on an ultra-left fiction. He is a joke. He is a Democrat robot who repeats the far left Democrat line. That is his goal for coming here. Once you realize that, you know that when he makes posts like this, because he comes here with an agenda.

If someone mentions it, I’ll bet that @csbrown will support the banning of Dr. Seuss books now that far left has called for it. He will defend it or ignore it.

My wife and I were once hitchhiking from Houston to Oklahoma (this was a long time ago). In East Texas, we were picked up by a woman and go into a conversation with her, and she asserted that the late President Kennedy was a Communist.

The proof? She said if you looked at the fifty-cent piece with Kennedy’s face on it, you would see a tiny hammer-and-sickle on his neck. I looked later and … she was right! Well… if you were suffering from defective vision, or defective good sense, I suppose you could sort of, maybe, see something that was not completely different from a hammer and sickle. (I looked it up just now and it’s the artists stylized initials, GR.

Usually this sort of craziness is confined to a certain part of the Right. Now it seems to be spreading.

:Here’s an anti-conservative on this ridiculous issue who is both honest and has good sense: 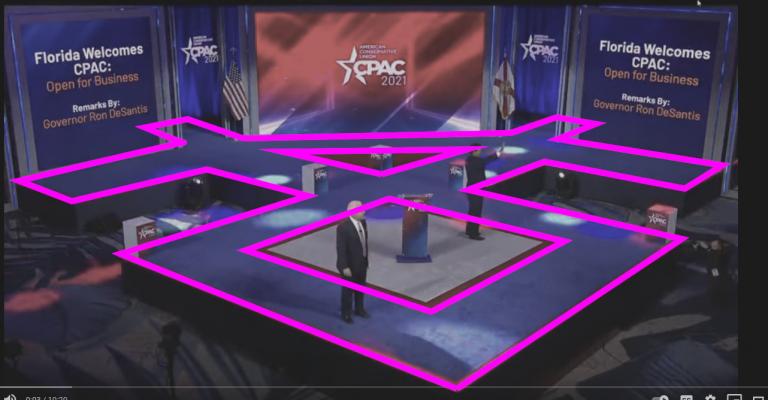 No, That's Not An Odal Rune

That's obviously not an Odal rune. It's a square stage set at 45 degrees, with two walkways to it (for that dynamic motion of two speakers entering at the same time), and three large video screens on risers as a backdrop.

The whole thing I’ve linked to above is worth reading – I’ll just quote an addendum he added:
Addendum, March 3:

Design Foundry, a reputable stage design firm based in Hyattsville (a DC suburb in Maryland), designed the stage; it was not designed by CPAC.

These facts put a stake through the heart of the paranoid conspiracy theories; but as Q Anon has shown us, PCTs are more resilient than vampires.

Some day … maybe in a future century, somone is going to write their PhD thesis, or equivalent, on the madness of crowds that gripped the United States as it slid off its position as world number one, and this ridiculous incident will surely merit at least a footnote.

Probably mechanized searching of sources will turn up this thread for the researcher, so … from the past, hello!

Second, I doubt he used English given that he was German.

… Okay I thought Germans used English characters? … I thought most of Europe used the English alphabet? … I thought… man my entire life is a lie. Thanks for the wake up call.

And I wasn’t implying Hitler used to type at me. I was telling you to stop typing at me using your nazi infused language. Dang man. Do all liberals interpret like this? Wait. I just answered my question.

Hey — check this out. All donkeys eat grass. Grass is a plant. Plants were created by nature. All donkeys must hate nature. That means that all democrats must hate nature too. I’m telling you; the dems put it out there for everyone to SEE if you just LOOK. They’re trying to kill all plants!

What’s your beef with nature democrats? Why are you secretly and openly conspiring to kill all plant life? And why do only crazy people and lame brains agree with me?

Maybe I’m not only connecting dots that shouldn’t be connected, but I’m also creating my own dot matrix masterpiece?

Everyone looking at this thread – indulging themselves when they should be out fighting racism, or defending the Republic – probably knows about the ‘monkeys and typewriters’ example, often used in popularizations of mathematics.

Namely, given a monkey sitting at a typewriter and hitting the keys randomly, and enough time, eventually the monkey will type out Hamlet. If you want to speed things up, make it a million, or a trillion, or any finite number of monkeys. And this goes for all works of literature, and all PhD theses, and all expressions of the laws of physics. The great Argentine author Jorge Borges wrote a short story along these lines about 80 years ago [https://en.wikipedia.org/wiki/The_Library_of_Babel ]

Now … the same goes for straight lines set within a rectangular framework, an obvious set of constraints for someone trying to design an easily-copied symbol … or laying out paths on a stage.

You can try it yourself. If we restrict ourselves to a square, and straight lines (which can be thick but of uniform thickness, and of lengths which are equal or only fractional multiples of the length of the squares side, ie 1/2, 1/3, 2/3), and only right angles or 45 degrees to each other or the sides … plus some basic symmetry requirements… well, we can will get a finite number of abstract symbols.

We could program a computer to produce them all, and someone probably has. All the crosses will be there: the ‘plus’ sign, the Christian cross, the Cross of Lorraine, St Andrews Cross, the Swastica, the Odal, etc. Someone who is better at combinatorics than I am can probably make my constraints more thorough and work out how many possible designs there are.

If they’re all symmetric and all lengths have integer ratios to each other, we will probably find them pleasing to the eye.

If you has shown me the odal in the context of a neo-Nazi march, I would probably have vaguely associated it with fascism … that is, would have pulled up previous images of it in similar contexts … or maybe not, because it’s not that common, especially in the US where fascists are allowed to use the swastika. But show it to me out of context, as just an abstract symbol, and I wouldn’t have immediately said, ‘Oh, that’s a proxy for the swastika’. And I’m a political obsessive with fifty-five years of obsessing.

Now … it’s not totally implausible that the person at that agency that designed this stage layout for CPAC, playing around with various layouts, had seen this symbol being carried by Nazis at some point and without making the connection, pulled it up out of his memory. Or, even, that he did make the connection and as a good Progressive, decided deliberately to propose it the CPAC functionary and see what would happen, said functionary taking the bait.

(What is not plausible is a CPAC functionary thinking, “Hmmm… let’s use a Nazi-related symbol for our convention… that’ll increase our popularity!”)

Sneaking symbols into items for public consumption is not unknown in history. A brave Philippino engraver, commissioned to make the plates for the Japanese occupation currency during WWII, put the tiny letters ‘AACS’ in where it was printed along the edge of the banknotes in very small type. After the notes had been in circulation for a while, someone noticed the letters, and people began asking what they stood for. And then the ‘translation’ was given out: ‘AACS’ stood for ‘American Army Coming Soon’.