What happened to Hydroxychloroquine and Ivermectin?

They’re being successfully used around the world as early treatment. Here in the U.S. we still seem to be suffering with OMB syndrome.

Episode 1,257 – From Rome: Doctors Against Madness

And yet the evidence (with links in the video) I posted shows that HC is not effective in treatment of COVID and can acctually cause harm to COVID patients. The jury is still out on Ivermectin, but there’s no reputable clinical study’s that show that it is effective at treating COVID at this point.

@csbrown28 seriously man what does it matter what they put in their body do you really stand for piss tests? No reputable doctor will push this crap there gonna have to doctor shop like methadone addicts isn’t that enough? Is it so hard that we respect each others bodies, I’m livid about the Sh*t going down in Texas it would be my Catharsis if just one of these people could suddenly realize the important of bodily autonomy.

seriously man what does it matter what they put in their body do you really stand for piss tests?

When snake oil cures are allowed, it does two things.

Chicken little save someone who wants and deserves saving. I’ve taken three people off the street into my home only one got their sh@t together and got their own place. I’ve paid my dues trying to save people who will use it, we should be fighting for the human infrastructure, curtailing china’s influence, anyone who wants the cure has it now.

At this point, I largely agree, but fighting ignorance is how I think people who want to save themselves do it.

Help get them outside of their bubble. Also peak into Reason The Federalist see how they think. Some of them think your a marxist, and want you dead. In reality your Tipper Gore on steroids trying to save those who don’t want it. Bear your weakness, find common ground, try and build on it, no one ever got forced into something positive. We need education we have a strong media, medical establishment, and health department. This Qanon stop the steal crap is thick it’s like some kind of political schizophrenia… you should get in touch with people who got out maybe they have the answers. 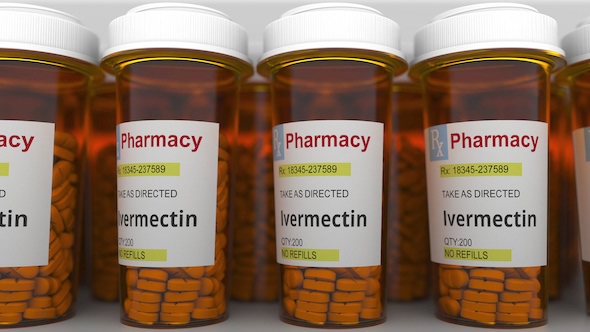 Doctors advice that Ivermectin or Monoclonal antibodies should be used within the first 10 days of contact/infection; while the virus is still alive. After 10 days the virus is already dead and has left trillions of cascade-causing debris viral...

Yes, and a cursory glance through the cited study’s in the links you provided uncovers all sorts of problems.

Poor vetting. Some of these studies lack peer review and others are outright fraudulent or sloppy and shouldn’t be touted as proof of anything other than those that wish to promote non-vaccine treatments will cobble together just about anything because they know most people won’t read them…

But let’s look at a few…

This study hasn’t been peer-reviewed turn out to be an outright fraud.

Then add it that, it’s not a test of Ivermectin, but a combination of drugs.

That said, the creator of the video clearly states the jury is still out on Ivermectin, though he pretty soundly shreds Hydroxychloroquine.

Another study cited in the link you provided that claims a 100% success rate for Ivermectin:

Let’s see, a little research uncovers the fact that in the paper they cite a hospital where the research was conducted. The hospital in question denied that any research had been done there. After that, the paper:

Yet, when that hospital was contacted, they claimed they had no record of the study in question taking place. The author then changed the name of the hospital to:

A look through the study finds tables where the math doesn’t add up and there are contradictions within the study itself on the number of participants.

Lastly, the study above was never submitted for peer review, rather it was submitted to an open-access journal, which is a website that doesn’t do any sort of critical analysis of the papers it accepts.

From a study from your source…Do the math here:

Now I challenge you to go back through the video that has cited anything other than actual peer-reviewed studies. He also knows that you don’t consider a single study as proof, but a meta-analysis that looks at many peer-reviewed studies as the place to look for a consensus.

You will note that the creator of the video I posted admits that we have no idea if Ivermectine works or doesn’t, but he does point out bogus information that’s cited as evidence that it does. He also states that Oxford university is now conducting the kind of study that should give us a scientifically valid answer to the question…

Your cited study on Hydroxychloroquine has the same problem:

Given the peer-reviewed information I provided in my video, I’m going to say my sources are better than yours.

Anti-science @akaOldDog I just laid it out, using actual science.

So long as the “Progressives” have open borders, it does not matter what their pronouncements are on drugs, or even Covid are. Controlling the virus takes a backseat to the goal of gaining power to all future elections is far more important. The illegal aliens can spread the virus all over the United States so long as the surviving illegals will be Democrat voters in the future. Nothing else matters.

So long as the “Progressives” have open borders, it does not matter

Still waiting for you to provide proof that there is some open borders advocacy champ.

EDIT: This thread is also why I am so skeptical of the “do your own research” BS On one side we have the “do your own research” advocate, gutsandcasca who did a hit and run, copy and paste “Here’s muh reserch i’m so smrat!!” and I’m sure most forum members would jump on the bandwagon because it confirms their own biases. CSBrown did an in depth deconstruction and I have no doubt it is going to be ignored by people like Caroline and silliessis.

“Do your own research” has and always will be code for, “Believe the BS I’m peddling”

Are you serious? Of course you aren’t because you have no credibility, You hate this country and its government.

In the mean time your country, Australia, has become a fascist state which has cracked down on your people because of Covid lockdowns. I know you are very pleased with that. Fascism, Communism, it’s the same thing in the modern world, is your ideal system.

Thank you for proving my point. Thank you for for also teaching me hating Donald Trump means hating America - I wasn’t aware.

Still waiting for you to point out someone advocating open borders as well. I’m guessing it’s going to take a while.

IF i were ill with covid…i would be willing to take the ivermectin. The fact that the gov’t and gov’t doctors are spending so much time running it down, makes me suspicious.

seriously man what does it matter what they put in their body do you really stand for piss tests?

When snake oil cures are allowed,

Caveat; if you don’t evaluate drug safety that can happen.

Markets, together with Doctors & patients, are perfectly able to discern drug efficacy. You don’t need an overbearing agency determining that, just like you can decided for yourself which over the counter med better treats a migraine.

They do this in Singapore; their medicated outcomes are better than ours, and their drug prices are cheaper.

Markets, together with Doctors & patients, are perfectly able to discern drug efficacy.

So then how would you explain the plethora of products that don’t work (meaning they don’t meet the claims they make) being sold for many years in the market?

Further, relying on the market and doctors who, shockingly, might just recommend cures for money will create a sea of products that don’t do what they claim that we’ll all have to navigate.

That said, I can’t, without doing so research explain Singapore, but without looking I would guess that there is a very different culture there that isn’t driven by individualist ideals of making money as a noble goal.

Take for instance that it is estimated that the Singapore Government, through Temasek and GIC, own companies that account for more than 60%+ of the market capitalization of the Singapore Stock Exchange.

That in itself seems to turn your response on it’s head. If they don’t need “overbearing agenncies” in Singapore, it’s probably because the government owns, directly or indirectly, most of the businesses listed on their stock exchange…

Markets, together with Doctors & patients, are perfectly able to discern drug efficacy.

Their “existing” isn’t really relevant – people use those anyway even under our current system, especially for conditions that are hard to treat or are terminal.

Treatments that work will rise to the top naturally, because they can be audited, and proven effective, and there will be a long line of Doctors who will know they work & why.

And again, this is culling from experience; nations already do this. We used too, and it’s why EpiPens were developed on the cheap in the 1970s, but today, competition to the EpiPen can’t spin up without spending billions.

We also too do still do this in the limited form of off-label drug use. Something works according to pre-1962 rules that stress safety, but left efficacy to Doctors and patients:

The key here is not a lack of regulation, but a lack of regulation by the FDA which centralizes the decision making, and demands efficacy thresholds that don’t take individual bio-variability fully into account. Drugs that only work for ~10% of patients can & do appear, and shouldn’t be rejected for it.

In the name of increasing certainty, we diminished innovation, and made market entry so hard as to be absurd. Why did we wait 10 years to approve beta blockers the Europeans were already using?
Why were drugs that were life-saving for people with AIDs walled off in trials, setting off the Buyers Clubs as a response? Why couldn’t even a shot-version of the EpiPen make it to market?

Turns out, the answer is the FDA’s incentives.

Further, relying on the market and doctors who, shockingly, might just recommend cures for money will create a sea of products that don’t do what they claim

And yet somehow, this isn’t a problem for automotive repair, contractor methods, or any other number of services where there is asymmetry of knowledge between the consumer and the provider. Something we call credence goods.

What works, floats to the top.

That said, I can’t, without doing so research explain Singapore, but without looking I would guess that there is a very different culture there that isn’t driven by individualist ideals of making money as a noble goal.

… you said of the freest market on the planet, where 1 in 6 are millionaires.

Ever see “Crazy Rich Asians”? Making money, and saving money, is very much apart of the culture.

Take for instance that it is estimated that the Singapore Government, through Temasek and GIC, own companies that account for more than 60%+ of the market capitalization of the Singapore Stock Exchange.

We would see the same thing if all of our Government property was run & managed by a semi-private entity, that could list itself on a stock exchange.

The relationship is pretty similar to Airport and Port authorities; ultimately publicly owned, but privately operated. Including their “public” hospitals.